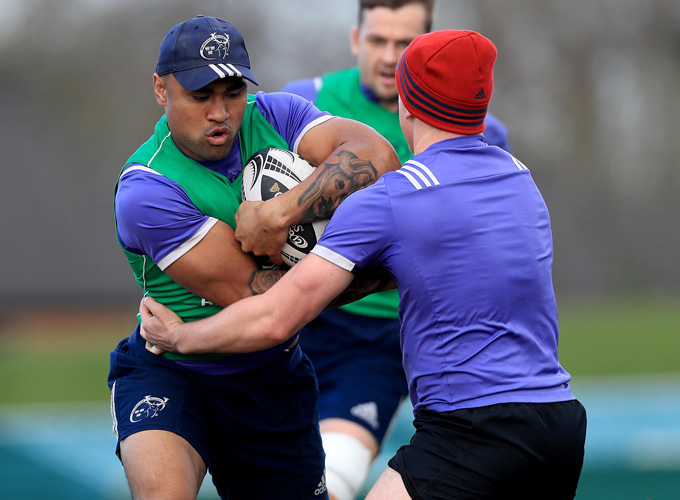 Back in the fold after an extended period on the sidelines with a shoulder injury, Munster centre Francis Saili is relishing his return to the playing field. With 14 players currently involved in the Ireland 6 Nations camp, his experience and attacking flair comes at an opportune time for the province.

Back in May Munster finished out the 2015/16 season with a much needed bonus point win over Scarlets, a result that guaranteed them Champions Cup rugby this season. Saili was one of Munster’s try scorers that day, combining beautifully with Keith Earls for what was the pick of the tries. But it would be quite some time before the New Zealander and the Limerick flyer could orchestrate another x-factor score. While Earls headed for South Africa with Ireland, Saili underwent surgery to correct a lingering shoulder issue and knew his time off the field would extend long beyond the off season.

“I was out for seven months and getting back on the pitch was a long time coming, but now that I’m here I’m glad to be back.

“The medical team were excellent in rehabbing me so I had no fears on that front, but for me it was about getting that confidence back in the first game. But with the way Munster were playing and the spirit amongst the guys, there was no shortage of confidence.

“A long term injury is not something I would wish on anyone and this was my first. It was a big learning curve and now I just want to push on with the team.”

Returning to action in December, by January Saili was back on the scoresheet for Munster, none other than Earls providing the crucial assist for what would be a pivotal try in Munster’s season to date. With the game in the balance away to Glasgow at Scotstoun, Saili’s loop coupled with a deft offload from Earls saw them unlock the Warriors defence for the only try of the game. That would be the winning of the match and secured Munster a place in the Champions Cup quarter finals for a record 16th time.

“I was buzzing after that try against Glasgow and it’s one of those moments that you have to capture and enjoy while also moving on from it as well because there are plenty more challenges in store. I was lucky enough that I caught Earlsie’s eye and he popped that ball up for me and there I was in the corner. I call Earlsie the Fijian Irishman. He’s got the feet of a Fijian and the intelligence of an Irishman.

“There’s a great buzz around the team at the moment and being a part of it is great. You rock in on Monday and there is a good and positive vibe around the place. If we keep that up especially with this next block of games it will be great. The internationals are away and that’s a good chance for us still in Munster to put our hands up and stay on top. We need everyone to see and feel the effort that we are putting in and the best way to do that is through your performance.”

Rory Scannell, Jaco Taute and the academy’s Dan Goggin are just some of those that have impressed at centre in Saili’s absence, something the former All Black uses a motivation to drive on his own performance.

“It’s great to have the competitiveness at training. We are also there to help each other out and make each other better. That’s the beauty about it. We’re not shy about the challenge of putting our hands up each week, but when we get an opportunity we’re there to put Munster first before our own individual goals. There’s good competition there and I’m happy with it.”