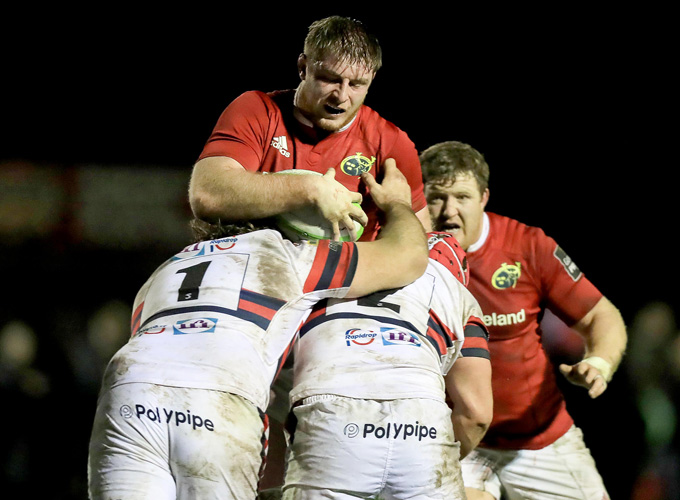 On the injury front, John Madigan picked up a knock to the ankle in Dolphin’s loss to Ballynahinch in Division 1B of the AIL and will be assessed further by the Munster medical team this week.

Dave Foley has met with a specialist following the wrist injury he sustained in action for Munster A against Saracens Storm. The second row will be managed conservatively with a view to returning to play in the coming weeks.

Good news for Darren Sweetnam (knee) and Duncan Casey (knee), both of whom progress to modified training this week, with good news also for the academy duo of Gavin Coombes and Bill Johnston.

The shoulder injury Coombes sustained against Saracens Storm is not as bad as first feared. The back row is training with the Ireland U20 squad this week, while playmaker Johnston (ankle) is expected to train fully with the province this week.

A number of contracted players lined out for their respective clubs over the weekend.

In Division 1A Cian Bohane crossed for Young Munster in their 19-10 win over Lansdowne at Tom Clifford Park. The academy’s Dan Goggin and Ben Kilkenny also featured for the Limerick side.

The academy’s Conor Oliver and Steven McMahon travelled to Lakelands Park with Garryowen where they suffered a 27-17 defeat to Terenure.

Also from the academy ranks, Ned Hodson and Rory Burke tasted defeat with Cork Constitution as the Corkmen went down 17-3 against UCD at Bellfield.

Academy backs Greg O’Shea and Stephen Fitzgerald lined out for Shannon in their Division 1B win over Galwegians at Thomond Park, the hosts winning 17-14.

While Madigan featured for Dolphin in their 30-8 defeat in Ballynahinch.