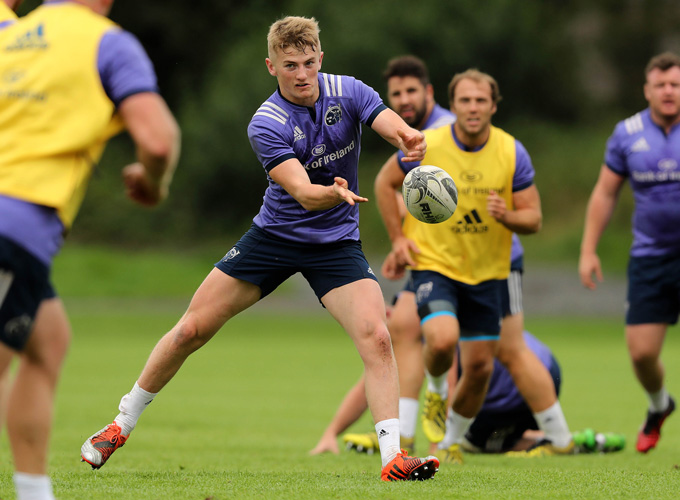 “It’s very promising and pleasing to have that many guys involved and now the next step for those guys is to put their hands up for selection in the matchday squads. Selection for the squad is something that we would have identified as a goal for guys in our summer programme and we’re delighted that it’s come to pass for so many of them.

“The physicality of the tournament is certainly of B&I Cup standard and not far off PRO12. Those who saw B&I action with us acquitted themselves very well against big Championship sides and that will stand to them in the coming weeks. Some players in the tournament will also have played PRO12 or Aviva Premiership. There’s no doubting it’s of an excellent standard and will be a real test for all involved.” View the Ireland U20 6 Nations squad here.

“To win four in a row with home and away wins over Rotherham and Doncaster was very encouraging. Probably the most pleasing part was that if we lost some senior players late on, which happens on occasion, the academy and sub-academy players who replaced them put in fine performances that contributed to our success in the pool stages.

“The only bonus point we failed to pick up in the last four games was in Bandon on a night where we started slow and Doncaster came with a real plan to interrupt our game after we put them to the sword in their own fixture a week previous. That aside, we are delighted to finish the pool stages as top seeds and secure the home quarter final against Ulster A in Irish Independent Park on March 12th.

“Ulster A will travel here with no fear and will be disappointed not to have secured their own home quarter final on the last day of pool action. The likes of Darren Cave and Craig Gilroy have featured for Ulster A in the current campaign and no doubt they will pose a massive threat in attack. But that will be a good test of our guys. We’ve had a good mix of young backs coming in and out of the team in recent games and to face a backline as exciting as Ulster’s will be an upward learning curve for them. There’s no PRO12 action that weekend so both sides could be bolstered further with senior players and hopefully we’ll have a good crowd out to support our lads on the day.” Look back at Munster A’s pathway to the B&I Cup quarter finals.

“It’s definitely that time of year where, with the internationals away, opportunities present themselves and we’ve had a good few guys togging out with the senior squad and been in matchday squads lately. Now we hope that those who have impressed in training and in the B&I Cup will get their opportunity and make the most of it. Dan Goggin, Brian Scott, Liam O’Connor, Rory Burke, Conor Oliver, Vincent O’Brien, Steven McMahon, Stephen Fitzgerald and Greg O’Shea are just some of the lads involved with the seniors at the moment.”

“Bill Johnston (ankle) is now back in full training and could be in line for a return to rugby this weekend.

“JP Phelan (hamstring) is very close to a return and should see action in a few weeks, as should John Foley.

“Ben Kilkenny made a return to action but was unlucky to pick up an injury in action for Young Munster on Saturday where he damaged both his shoulder and ankle. He is currently being assessed further.

“Sean O’Connor continues to follow his rebab post-surgery for an ankle injury and is working hard in the gym while off his feet.”