Getting To Know Dave Kilcoyne 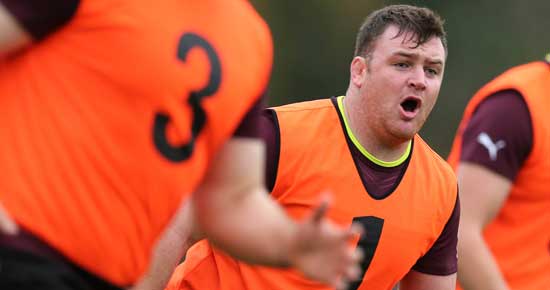 Looking to Ireland v South Africa on Saturday and a possible first cap for Dave Kilcoyne it’s only fitting we profile him today.

Promoted after his second year in the Academy, Kilcoyne secured a senior contract at the start of the 2012/13 season.

The 23 year old prop has made 8 appearances for Munster this season including a Heineken Cup debut against Racing Metro.

Marooned on a desert island what could you not be without: Food

Favourite sport other than rugby: Tennis

Person you would most like to meet: Johnny Drama

Where and when did you first play rugby: With UL Bohs Under 8s

Best career advice you were given: Keep working hard and take your time

What you like most/least about being a rugby player: The friends you make./90 second drills at the end of training.

Other sports that you played: Hurling,Soccer,Basketball and Gaelic Football.

Sporting event you would most like to attend: Usain Bolt at next Olympics

If you weren’t a rugby player what would you be: A businesss man.

Three people you would invite to dinner and why: Johnny Drama, John Goodman from Roseanne and Mike Sherry to see if they are related or do they just look alike.