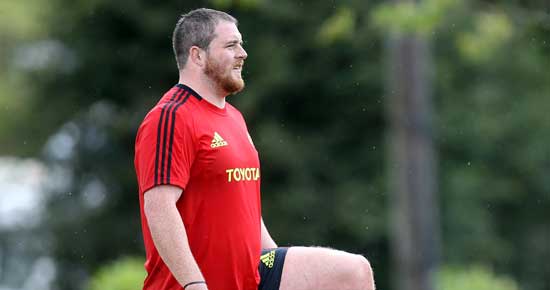 Ian Costello’s Munster A side are in action this week playing Leinster A on Thursday at 2.30pm in Donnybrook.

The Munster squad return to full training in Cork tomorrow after their week off, which saw a number of players representing their clubs at the weekend and they may well see some game-time this Thursday in Dublin.

Included in the club representations were Johne Murphy in the centre for Young Munster, Luke O’Dea at fullback for Shannon and Tommy O’Donnell at number 8 for UL Bohs.

A notable absentee from the A side will be development prop Alan Cotter who has joined Bath Rugby on loan from today until the end of the month. This is Cotter’s second stint with a Premiership side after his recent spell with London Irish where he played 25 minutes of rugby in each of his 3 games.

Barry O’Mahony has been ruled out of action with a groin injury and joins James Coughlan, Sean Dougall and Niall Ronan on the rehabilitation list.

It has also been confirmed that Paul O’Connell will not play any part in the remaining Autumn Internationals.

Getting To Know Dave Kilcoyne