O’Callaghan and Sherry Return To Action 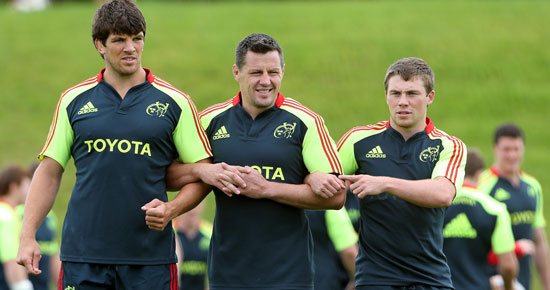 Besides the three newcomers the only uncapped player in the squad is wing forward Barry O'Mahony while Doug Howlett leads the side for the first time competitively in his new role as squad captain.

Downey and Laulala form the midfield pairing and after an impressive debut season in which he scored four tries Luke O'Dea is named on the left wing.

Up front there's a strong spine to the selection, Damien Varley propped by the South African pair Wian du Preez and BJ Botha. Donncha O'Callaghan is partnered by the hard working Billy Holland with Dougall joined in the back row by youth and experience in the shape of Paddy Butler (6) and the ever dependable James Coughlan at number 8.

And there will be no easing into the season for Penney's side as Michael Bradley welcomes back a number of his internationals who were involved in the the triumphant three Test Australasia tour.

Top try-scorer Tim Visser, skipper Greig Laidlaw, Nick De Luca, Ross Ford and Ross Rennie could all feature at some stage on Saturday while David Denton rejoins the extended squad for the first time since sustaining the ankle injury that forced him to miss the summer tour. Bradley is not expected to confirm his starting XV until the Friday noon deadline.