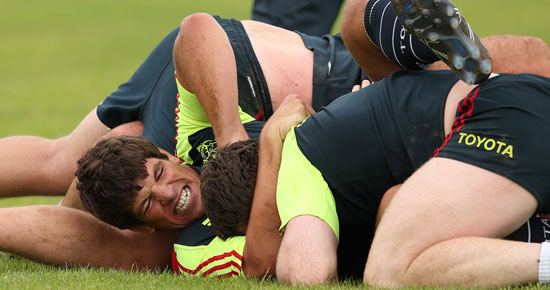 Donncha O’Callaghan is just one of two (Mick Sherry the other) internationals involved in the summer New Zealand trip, to be included in the Munster match day squad for the opening RaboDirect PRO12 clash with Edinburgh on Saturday (Murrayfield 8pm).

O’Callaghan played a total of 64 minutes over the course of the 3 Tests while Sherry never got to kick a ball and therefore both get back to Munster action ahead of their international colleagues.

O’Callaghan, who is set to win his 204th competitive cap, almost winces when reminded of his last run out in a Munster shirt. “Yeah, the Rabo semi-final against Ospreys over there. That was awful, it really was. We left ourselves down. And that’s not something we’re proud of when it happens."

“It’s hard to explain performances like that, say when you compare it to the game against Northampton in Milton Keynes.”

Donncha is totally honest when asked what has to be learned from the respective performances. “We know that when we’re focussed, when we’re on our game, we’re capable of delivering. And when we’re not we can make ourselves look awful ordinary.”

Looking forward to the coming season, now just a day away from the start, O’Callaghan strikes a cautious note. “When you think about it it’s just over three months since that game and there hasn’t been that big a change in players. Micko, Fogs, Mafs and Tomas are the four who are gone since then. So we have to be mindful that those of us who were there in the Liberty Stadium are still around and like I said we have to have our heads right or that sort of thing can happen again. And we can’t look beyond ourselves to make sure it doesn’t.”

As a senior player he accepts there is a responsibility. “Absolutely. Those of us who have been around this long need to set an example. Everyone who throws on a jersey has to front up but there has to be leadership and that comes with experience and there’s plenty of that in the squad and, the senior lads have to keep our end up, the younger lads will follow, there’s no fear of that."

“We’ve been prepared well. There’s no excuses on that score. But there’s been a big clear out too. I've been sharing a dressing room with Hayes, Fla, Leamy, Quinny, Wally, Micko all my career, since Under 21, then there was Tomas and Fogs and Mafs there too. When you think about it, that's some talent. How many caps did they have between them ? ” he asks (1218 in fact).

“So it's going to be odd to be there without them. You're almost looking at the door, expecting them to come in. So yes there have been huge changes and I hope people realise that. When I came into the side we were evolving and there were days like we had against Ospreys. And we learnt and we came good."

"No reason why we can't do it again. We have the young lads coming through. It won't happen overnight. But I've no doubt it will happen."