Munster Name Their Side To Face London Irish 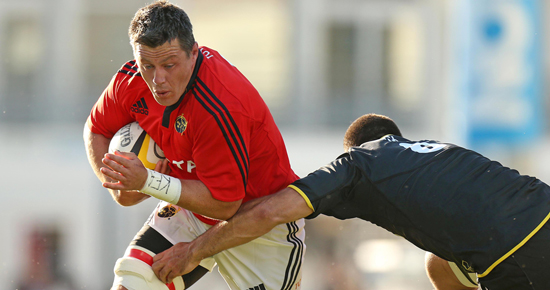 Rob Penney makes five changes to his starting XV for Munster’s final pre-season game against London Irish this Friday while A team Head Coach Ian Costello names his side for a pre-season friendly against Connacht A on Thursday.

Johne Murphy is named in the backline in place of Luke O'Dea while Wian du Preez, BJ Botha, Dave O'Callaghan and James Coughlan all start in the pack with Stephen Archer, Tommy O'Donnell, Paddy Butler and Luke O'Dea named on an extended bench.

Dave Kilcoyne joins the Munster A's where Ian Costello has named a side that includes a mixture of senior, academy and club players to take on Connacht A in a pre-season game at the Sportsground on Thursday, ko 3pm.

Luke O’Dea, Sean Scanlon and Philip Donnellan will get some game time starting out against Connacht A and have also been named on the bench for Friday night’s game against London Irish, ko 7pm.