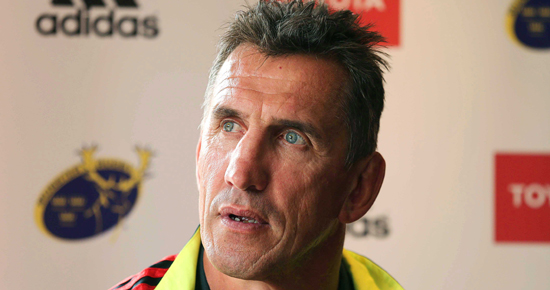 Rob Penney secured his first win as Munster Head Coach against Bristol in Musgrave Park on Friday night and the New Zealander is content with the steady improvement his side are making.

“There’s some good growth in the areas that we’re building, but there’s still a lot to do. We have to get more ruthless about our ability to retain ball and build pressure, but it’s early days,” he said after the win.

Despite numerous handling errors, Penney feels his side produced a much-improved performance after last week’s defeat in France,“There was grease on the ball tonight and that makes it a little bit more difficult, but we have to improve in a number of areas to get the performance that we’re obviously all searching for” he said.

“Against La Rochelle we played some nice footy and again the errors caused us anxiety and today we were probably 30 or 40 per cent better than we were last week on completion and that’s the exciting component because we’re creating opportunities that everyone can see.”

New signing Sean Dougall impressed and was singled out for praise by the New Zealander, “He’s got a lot of ability and he finds himself in places where good seven’s need to be and he’s pretty robust in there and hard to shift. Often he’s in the right place and being in the right place will give you a pay-off at some point.”

The only points Munster conceded came from penalties and Penney admitted that his side must improve their discipline, “The number of penalties we’re conceding is a problem right across the park, I think there were eight penalties and four or five free kicks today and against a good side they’re not going to let you off the hook.”

Munster face London Irish at Musgrave Park next Friday night in their final pre-season match and Rob is hoping for further improvement, “We’re only at week two of 40 weeks so we’ve got plenty of time to work on it but we don't want to leave it until week 30 before we get it right!”

Munster Name Their Side To Face London Irish