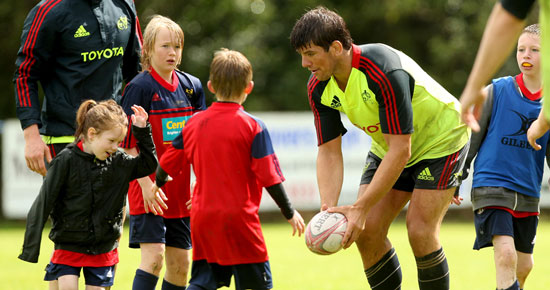 Despite the bad weather, a night camping in Tralee RFC and an open training session didn’t dampen spirits as players hit the ground running this morning with a dedicated Tralee following in full support.

The players started out on Thursday afternoon attending the “High Ropes” activity centre in Killarney before moving on to Tralee where the club members were ready and waiting with Munster flags on display throughout the town and roadside all the way out to the clubhouse.

On arrival the squad was broken into teams with players taking part in a competitive cook-out and a tent building exercise – the tents went on to serve as the overnight accommodation.

Six barbeques were on the go as players got stuck in to making their culinary masterpieces. The winning team comprised of BJ Botha, James Downey, Marcus Horan, Felix Jones, Johne Murphy, Ian Nagle, Tommy O’Donnell, Ronan O’Gara, Niall Ronan and Sean Scanlon. According to the judges the highlights of the evening were the perfectly cooked steaks by Ronan O’Gara and Peter Stringer’s wholemeal pancakes.

It was a 7am start on the Friday morning with the dismantling of the tents followed by a training session that included the squad playing with the Summer Camp participants and meeting the new Munster Rugby mascot Oscar, before spending time with the dedicated fans that braved the elements to show their support.

Check out the photos of the players meeting fans here.

The squad under the shelter at Tralee RFC

Confused much?…. and yes, tents did go up incorrectly!

Now we're getting somewhere….. nearly there!

Paul O'Connell, even on a mission in tent building

Not bad in the end – Munster go camping!

BBQ time as players cook for each other

Overnight camping complete with a bonfire