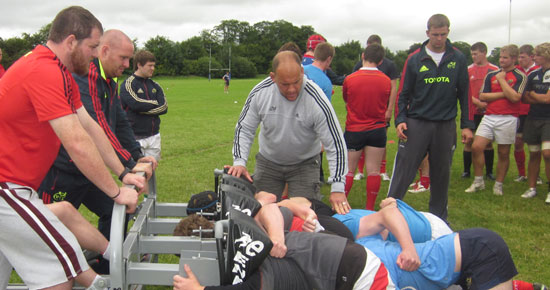 Players from U20, 19 and 18s level enjoyed an afternoon of practical modules hosted by Munster Rugby senior players, drawing from the vast knowledge and experience on offer.

Donncha O’Callaghan and Dave Foley were assigned the second rows while Sean Henry and Mike Sherry looked after the hookers. Conor Murray and Cathal Sheridan attended to the scrumhalves with Botha and Alan Cotter busy at the scrum machine. Niall Ronan joined his former team mate Denis Leamy with the back-row players, and Johne Murphy and Felix Jones monitored the backs.

Video: Donncha O’Callaghan talks about the benefits of such a camp, and reminisces about his own time at that level here.

Video: Mike Sherry refers to his own experiences also and how he remembers the day Jerry Flannery and Frankie Sheahan paid his rep side a visit. View here.

The 2012 Interprovincial fixtures were confirmed today for the Munster Rugby representative sides and can be viewed here.