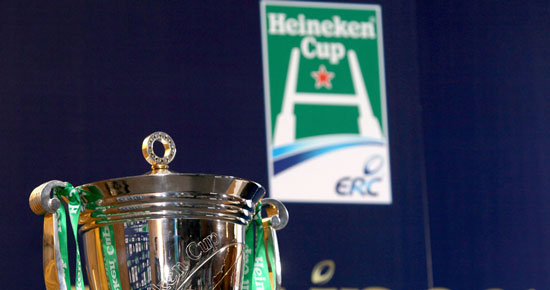 Munster will commence their 2012/13 Heineken Cup campaign away to Racing Metro 92 at the French national stadium, Stade de France on Saturday October 13th with a local kick off time of 2.35pm.

A week later Munster will take on last year's Heineken Cup semi-finalists Edinburgh in Thomond Park with an early kick off on the Sunday at 12.45pm.

Saracens are in line for the back to back December fixtures with the away venue in London yet to be decided on Sunday December 16th.

Rob Penney is looking forward to the challenge ahead with French opposition up first, "Racing are a magnificent side, they’ve got undoubted potential, and for us to get them early is going to be a real challenge. If they’re up to the task and excited about the opportunity then they will be a handful.”

"We’re striking them at home at Stade de France in Paris, so it’s a fantastic rugby venue for the boys to play on and I think it will be a really good launching pad for our European campaign."

Talking about Munster's pool 1 opponents Penney added "Having Saracens and Edinburgh also in our pool has given us some real quality opposition and they are all strong sides, so when they visit Thomond Park it’s going to be important our passionate supporters get in there and give the boys a lot of support which I’m sure they will.

And then we just need to be as good as we can be and produce the right performance that the Munster boys know they are capable of.”

And looking forward to his first Thomond Park Heineken Cup experience Rob said “Without doubt the Heineken Cup is obviously where it’s at, in terms of the level of footy the boys can aspire to play outside of international rugby, and I’m really excited about the European championship and that first game at home against Edinburgh.”

Pool 1 Fixtures: all kick off times are local to where match is played