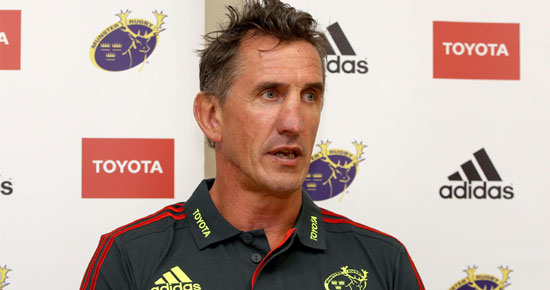 In his second week of pre-season new Head Coach Rob Penney talks about adjusting to life in Cork after making the move from New Zealand.

“The first week was hectic, bit of a spinning top just trying to get to know all the players and work out how the system works here but by the end of the week I started to generate a nice picture of what I was in for and over the weekend was able to solidify my thinking.

This week we’re into our rugby stuff, and as I said before the boys are working great so I just want to slip in and add value anywhere I can.

I just about have the names now, and I’m generating a bit of humour with the pronunciation of some of the names and my emphasis on certain vowels, but I’m glad the boys are able to laugh at me.”

Penney met with Munster’s returning internationals last Friday before they returned to full training this week and is now working with the full panel of players. “The internationals had their first training day on Monday and most of them won’t be available until after round 3 so they’ll be doing their conditioning and pre-season phase now . They’re integrating with the guys when they can, and doing their own thing in terms of their own needs as well.”

It’s not all about the rugby as Rob and family adjust to their new Irish lifestyle, “I’ve been obviously flat out with the rugby stuff so my wife Erin and two boys Cameron and Alex are making themselves as busy as they can during the holidays.

My wife and I are really keen to get them into some sports so hopefully they’ll get into a bit of gaelic football over the next month or so before school starts so they can start to form some networks and some friends here. The boys love their footy (rugby) so they will certainly be looking to play it, and playing gaelic football would be an opportunity to meet some locals and keep fit for the footy season as well.

On Sunday we were looking for a local game to head to but we couldn’t find anything so we watched the Dublin/Meath game on television and had a bit of discussion about that and the boys are keen to give it a go.

We’ve been hunting for accommodation most evenings and over the weekend so hopefully in the next few days we will secure something."

Penney is looking forward to kicking off the new coaching era in front of local support when Munster take on Bristol and London Irish in Musgrave Park saying “we’ve got a commitment in Tralee next week and then we’re over to La Rochelle for a few pre-season days and then we’ll be into our home games in Cork which is fantastic for the locals to get involved and on board with this new era.”

Munster Rugby On The Road