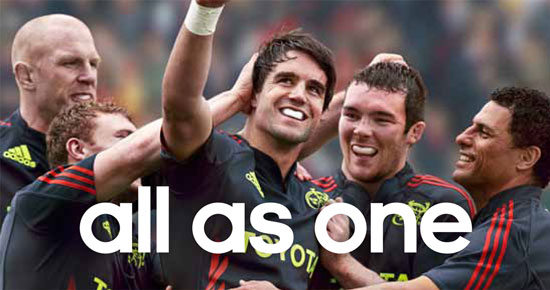 This year the fans helped to reveal the new adidas alternate Munster Rugby jersey after clicking through on a facebook app on the Munster Rugby Supporters club page.

The 2012/13 alternate jersey and new training jerseys are available to pre-order via the Munster Rugby Stores in Cork, Limerick and online, and will be in-store from August 9th.

Eight lucky fans from around the province who took part in a twitter #adidasallasone competition are currently at the official launch of the jersey with Paul O'Connell, Keith Earls and Conor Murray.

The new jerseys can be viewed and pre-ordered online here with more of the kit such as the men's leisure wear available here , and the younger Munster fans looked after here.