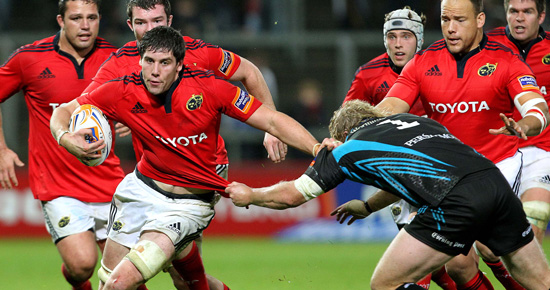 With kick off to the 2012/13 season looming we talk to Dave O’Callaghan, one of five Munster Rugby Academy players making the step up to the senior ranks.

The Youghal native completed his academy programme by claiming the “Academy Player of the Year" award for 2011/12 following a season where he made ten competitive appearances for Munster, including a Heineken Cup debut against Northampton Saints in January.

The twenty two year old is not fazed by his recent promotion following a year of integration into the senior side “I suppose the only difference for me this summer is the development contract but otherwise it is the same training and intensity. I did pre-season with Bryce last summer and played in the opening games so I know what it is all about this time around.”

“I’ve been injured most of this pre-season following surgery on a tendon in my knee, so I’m just back fully training this week. It was an injury that I was getting by with, but it was just better to get it fixed now while I had the chance, and I've just completed a really intensive rehab course. It was probably not the worse time to be out of action with so many other players recovering as well, so there was a competitive environment there and we really pushed each other on.”

Another obvious change this summer is the coaching personnel with Dave commenting on Rob Penney’s recent start, “I’ve only come back into it but Rob has been checking up on me and asking how it’s all going. We’re all delighted with his attacking philosophy and he’s all about throwing the ball around so it’s exciting, especially for us younger players breaking in. We knew of his pedigree from Canterbury and we got to watch him in action with the New Zealand U20s as well. He’s got a reputation for trying out youth and we have a young squad so it’s obviously a promising time for us all.”

Now going into his final year in UCC, studying BComm, Dave has the task of balancing life as a student and a professional rugby player, “I’m living at home in Youghal for now and I’m enjoying the home cooking and comforts but I’ll make the move up to Cork soon enough just to give myself a break driving wise and get closer to college and training.”

And looking to the season ahead O'Callaghan said “I would love to get into the Heineken Cup squad again and push on from there. There are places up for grabs so I’m sure we will all be fiercely competitive. In Munster we are blessed with great players in the back-row and second row so it is a competitive place but if you do break in, fingers crossed you get to excel in that position.”