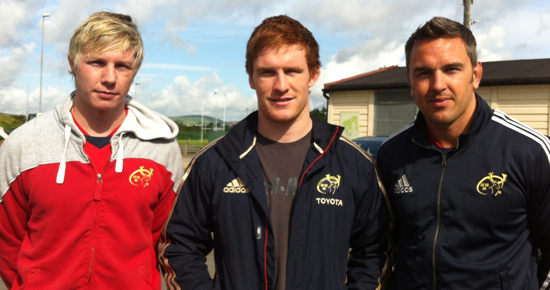 Just five weeks after they played their last game Munster resume training for the 2012/13 season with a get together in Bishopstown, Cork, this morning.

It was a reduced squad, with the internationals missing, that was put through their initial paces by Bryce Cavanagh (Head of Fitness) and included Niall Ronan, Danny Barnes and Dave Foley as well as one of the newer additions to the squad, Sean Dougall.

Ronan, Barnes and Foley played no part as they continue to recover from injury that saw them miss the end of last season but all three expect to be involved in pre-season matches.

Dougall pitched up in Cork last week for the first time after spending two seasons with Rotherham Titans and before that Ulster where he played at Academy, U19 and A level.

Born in Scotland, his father is from Northern Ireland and played with London Irish, Dougall's preferred position is number 7 though he is quite clearly prepared to play on the other flank if it means getting his place on the Munster team.

"I always said when I went to Rotherham, I only wanted two years there. Like any player I want to play at the highest level I can. At the start of last season I said I wanted to move on, I want to go up to the next level. So then when Munster approached it all sorta fell in place and I was really happy to have the opportunity.

He only arrived last Thursday and admits that since then he's really only been finding his feet but now that training has started he's looking forward to getting involved and hopefully staking a claim to a back-row berth in the match day squad.

"Like all players in the squad I want to get as much game-time as possible. Without getting ahead of myself I want to play an important role in Munster. I don't want to just come over here for the sake of it. I want to make an impression.