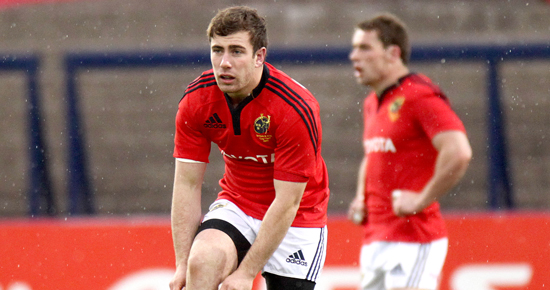 Munster’s JJ Hanrahan has been included on the IRB’s shortlist of three nominees for the IRB Junior Player of the Year Award 2012.

The 19 year old who began his rugby career with Castleisland RFC has been instrumental in Ireland’s Junior World Cup campaign.

dictated play from the out-half position as Mike Ruddock’s side shocked the hosts with a 23-19 victory. Hanrahan continued to be hugely influential in Ireland’s two meetings with Six Nations Champions England.

JJ Hanrahan would become the first Irish winner should he be named ahead of fellow nominees Shaun Adendorff and Jan Serfontein from South Africa, who will compete in the Junior World Cup final against New Zealand on Friday.

Munster Academy and former Rockwell College pupil Hanrahan will wear the No. 10 jersey in Ireland’s final match of the championship when they take on France on Friday 22nd June to compete for the 5th and 6th spot.

Commenting on Hanrahan's nomination Munster Elite Player Manager Peter Malone said "we are delighted with JJ's performance in Ireland's Junior World Cup campaign and he has taken his opportunities to play in the out-half position with both hands. His nomination for this prestigious award is well deserved and with fellow Munster man Niall Scannell leading the team it is a huge honour for the Munster Academy".

"We would also like to acknowledge the role of Elite Player Development Officer Greig Oliver as Ireland backs coach along with fellow team members James Rael and Shane Buckley for their contributions and wish them all every success against France on Friday."

For the first time the public now has the chance to vote on this shortlist. Please support JJ by clicking on www.facebook.com/irbjuniorworldrugby

The shortlist represents the voting of team managers, match officials and media at the tournament and the winner will be announced following Friday’s final at Newlands on 22nd June.

Earls Back For For Final Test