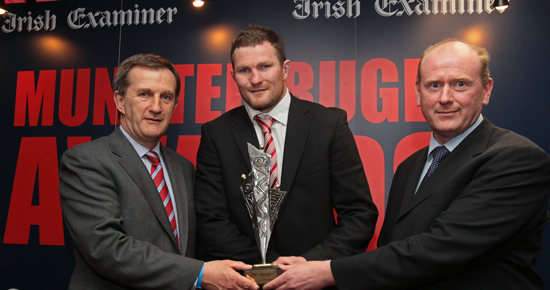 The annual Munster Rugby Awards, in association with the Irish Examiner, took place in Thomond Park on Saturday night with eleven awards presented to worthy recipients involved in domestic and professional rugby in Munster.

While the Munster team played out a 36-8 victory against Ulster, squad players not involved such as Doug Howlett, Denis Leamy and David Wallace joined domestic game volunteers in recognising and honouring rugby achievements across the province.

Ryan, a Nenagh, Co. Tipperary native made his 100th appearance last Saturday in Thomond Park against Ulster in the RaboDirect PRO12. He made his senior debut for Munster off the bench in the Celtic League game against

Opsreys in St Helens (Swansea) in September 2004. His first start came exactly two years later alongside Chris Wyatt in the League game against Cardiff at the Arms Park. Ryan was one of the Heineken Cup medal winners in 2008 and he also made his senior international debut that year against Argentina. He now joins previous winners Mick O’Driscoll, David Wallace, Ronan O’Gara, John Hayes and James Coughlan in receiving the accolade.

The Young Player of the Year was awarded to Cork’s Peter O’Mahony. The 22 year old first came to prominence when he captained Munster to the British & Irish inaugural final in the 2009/2010 season. He ended that season with two appearances for the senior side off the bench. Last season he made his first start for Munster in the game against Australia and his first league start came against Scarlets a week later. This year he captained Munster in five of their opening six RaboDirect PRO12 matches, made his Heineken Cup debut against Northampton Saints in Round one and scored a sensational try against Castres in Round two. He went on to make his Ireland senior debut game against Italy last February.

Academy player David O’Callaghan was the worthy recipient of the John McCarthy award for Academy Player of the Year. O’Callaghan is in his final year in the Munster Academy and played two years of Irish U20's where he progressed to become an integral part of this year’s Munster 'A' British & Irish Cup winning team. He made his competitive debut in the Rabodirect PRO12 against the Ospreys in October and made his Heineken Cup debut against Northampton in Munster 's memorable victory in Milton Keynes last January. Aged 22 and a native of Youghal, Co. Cork, O’Callaghan plays his club rugby with Dolphin RFC and has secured a development contract with Munster for next season.

Senior Club of the Year – Cashel RFC. The Tipperary club won the Junior Club of the Year in 2011 and were promoted to Senior Level that same year. In their first year as a senior club their achievements have been unparalleled. They reached the semi-final of the Cork Charity Cup, the last eight of the Munster Senior Cup and the highlight of their season was being crowned champions of Division 2B of the Ulster Bank AIL League. Cashel went through their league campaign undefeated, the only club to achieve this in the Ulster Bank League this season.

Hall of Fame Award – Ray Hennessy. Capped on ten occasions for Munster, Hennessy learned his rugby at Presentation Brothers Cork, and played in all three schools interprovincial matches where and was honoured with the captaincy against Connacht Schools. In the autumn of 1955 he played full back against Leinster in the junior interprovincial match in Dublin. He won the first of his two Munster Senior cup winning medals with Cork Constitution FC and four years later captained the Cork club when they won a memorable decider against Garryown FC in Thomond Park.

Women’s Player of the Year – Heather O’Brien. Playing for Highfield RFC, O’Brien was selected for all of Munster’s interprovincial games this season. Her performances caught the attention of the International management and as a result was involved throughout this year’s Six Nations tournament.

Referee of the Year – John Lacey. This is the second year Lacey has been awarded the honour of Referee of the Year having first won it in 2007. Lacey began refereeing in 2007 and this season refereed in his second Junior World Cup, Heineken Cup, RaboDirect PRO12 and Amlin Cup games. This June he has been selected to referee England v Barbarians, Fiji v Japan and Samoa v Japan in the Pacific Nations Cup before going to South Africa as an Assistant Referee for South Africa v England.

Junior Club of the Year – Richmond RFC. The Limerick side has enjoyed a wealth of success this year winning the Munster Junior League and making this their second league win in three season. Richmond have also won the Junior Cubs Challenge Cup this season and recently won the Transfield Cup, retaining it for the third year in a row.

Club Youth Section of the Year – Bruff RFC. With 262 players registered in their Youth section and eight players selected for the Munster Youths, Bruff youth squads once again recorded a successful season with the U17s winning the Avonmore SuperMilk Munster Youths League and North Munster league.

Club Mini Section of the Year – Killarney RFC. The Kerry club prove worthy winners with 125 registered players at mini level and 10 qualified mini coaches who all are fully compliant with player registration. The club has excellent coach education policies and referee participation and encourage every child irrespective of experience or ability to get involved in both matches and training as a means of helping them to achieve their potential.

School of the Year – Ard Scoil Ris. The Limerick school has recorded a very successful season winning the Schools U14 McCarthy Cup, the inaugural Topflight National U18 Rugby Seven’s Champinship and also reached the final of the Munster Schools Junior Cup two years in a row.

Varley and O’Connell A Doubt