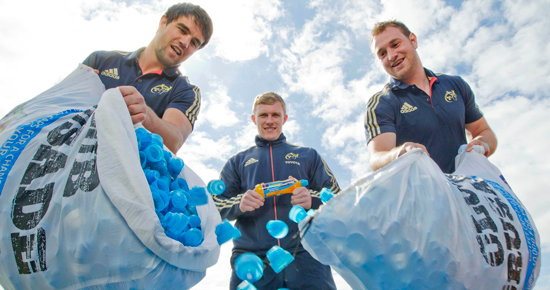 Munster players Conor Murray, Keith Earls and Johne Murphy linked up with Lucozade Sport yesterday at the University of Limerick in support of the Sport’s Club Crusade initiative.

Over 400 clubs have already joined the Club Crusade so far and it has really captured the imagination of sports clubs throughout the country.

Speaking on behalf of Munster Rugby, scrum half Conor Murray said “Every club finds fundraising difficult in today’s climate and with many adult teams drinking Lucozade Sport before and after training anyway, it is easy to collect the caps from the bottles and be in with a chance to win €;10,000 which goes a long way in running a club.”

Jim Geraghty, senior brand manager, Lucozade Sport said, “The Club Crusade initiative is really taking off with over 400 clubs signing up over the past two months. There is still plenty of time left so if clubs would like to be in with a chance to win €;10,000, log on to www.lucozadesport.ie and get collecting!”

Clubs can enter the Club Crusade by logging on to www.lucozadesport.ie and registering their team.