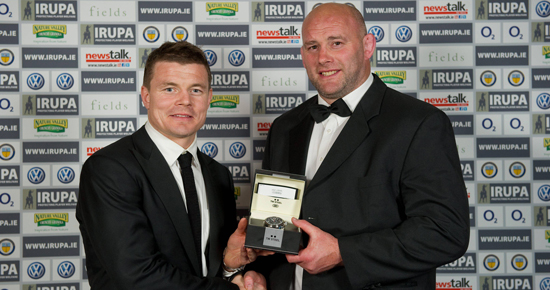 The 22 year old Corkman received his award following a stellar season where he captained Munster in five of their opening six RaboDirect PRO12 matches and made his Heineken Cup debut against Northampton Saints. O’Mahony also claimed his first Ireland cap this season against Italy last February.

Joining Ireland’s heroes in the IRUPA Hall of Fame was Munster legend, John Hayes who was presented his award by Ireland captain Brian O’Driscoll.

Recently retired Mick O’Driscoll was awarded the inaugural IRUPA Hibernia College Medal for Excellence, which rewards on field effort combined with off field commitment to the game.

Nominees were voted by their peers but were also judged on their contribution to the sport through community involvement, education, work and charitable initiatives.