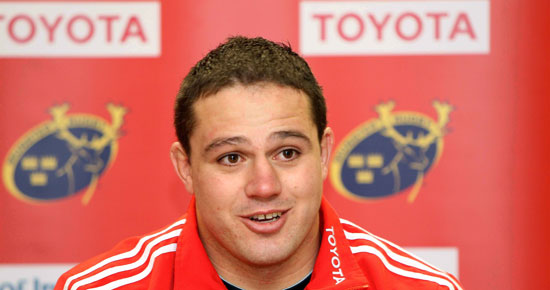 Included at yesterday's get-together were newcomers centre Sam Tuitupou and prop Peter Borlase along with Wian du Preez who of course is familiar to Munster players and supporters having done duty earlier in the season.

Du Preez is signed for a two year stint and will again live in Limerick. “I'm really delighted to be back and looking forward to my time here,” he said in a Dug-Out Bar that had been requisitioned for gear distribution under the watchful eye of Kit Manager Jack Kiely. “I will once again live in Limerick where me and my wife enjoyed so much last time.”

Prop Borlase is on a first trip to Ireland to meet the squad but returns to New Zealand on Friday to prepare for the NPC Championship at the end of which he will return to Munster.

Those who had missed the latter part of last season, Denis Leamy, Donnacha Ryan, Ian Dowling and Doug Howlett along with longer term injured such as Felix Jones, Barry Murphy and  Darragh Hurley are all expected to feature at some stage in the pre-season friendlies against Leicester Tigers (August 20th) and Gloucester (August 27th) while Paul O'Connell and Keith Earls are expected be available for the early Magners League games.

The opening weeks will see the squad concentrate on gym work with just one field session a week. The internationals will return on Monday 26th and head for La Manga for  aweek long pre-season training camp.