All Square At The End In Newlands 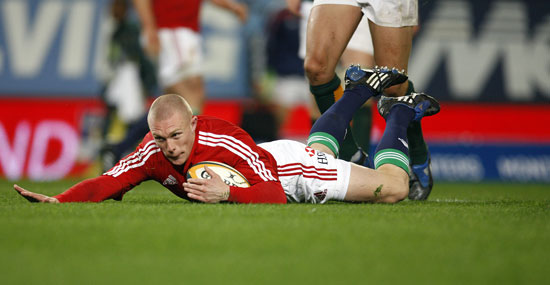 The Lions led 10-3 at the break but Earl Rose narrowed the deficit with a 49th minute penalty. He should have made it even narrower in the 61st minute but was wide from a good position.

James Hook registered the Lions’ only score of the second half when he was successful with a 76th minute penalty but then the Boks worked themselves into position to snatch that late try from replacement Danwel Demas with de Waal landing the conversion from near the right touchline in the driving rain.

At the start, Ronan O’Gara looked odds-on to open the Lions account when they were awarded a penalty after just three minutes but he hooked his kick badly. There was no mistake five minutes later and when Earls appeared in the out-half channel his trademark jink took him easily through the Boks defence.

It wasn’t until the closing stages of the half that the home side showed any semblance of a threat and their out-half Earl Rose finally opened the scoring with a 36th minute penalty to leave his side trailing by seven points at the break.