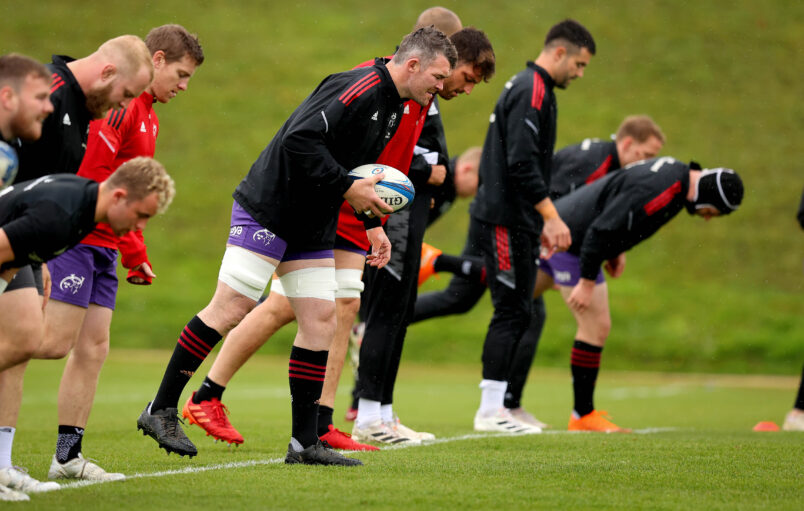 Peter O'Mahony returns to captain the side.

The Munster team has been named ahead of Saturday’s Champions Cup Round of 16 knock-out clash against Exeter Chiefs at Thomond Park (3pm).

Tickets are available to purchase here from €25 for adults and €12.50 for juniors and will be available online right up to kick-off. 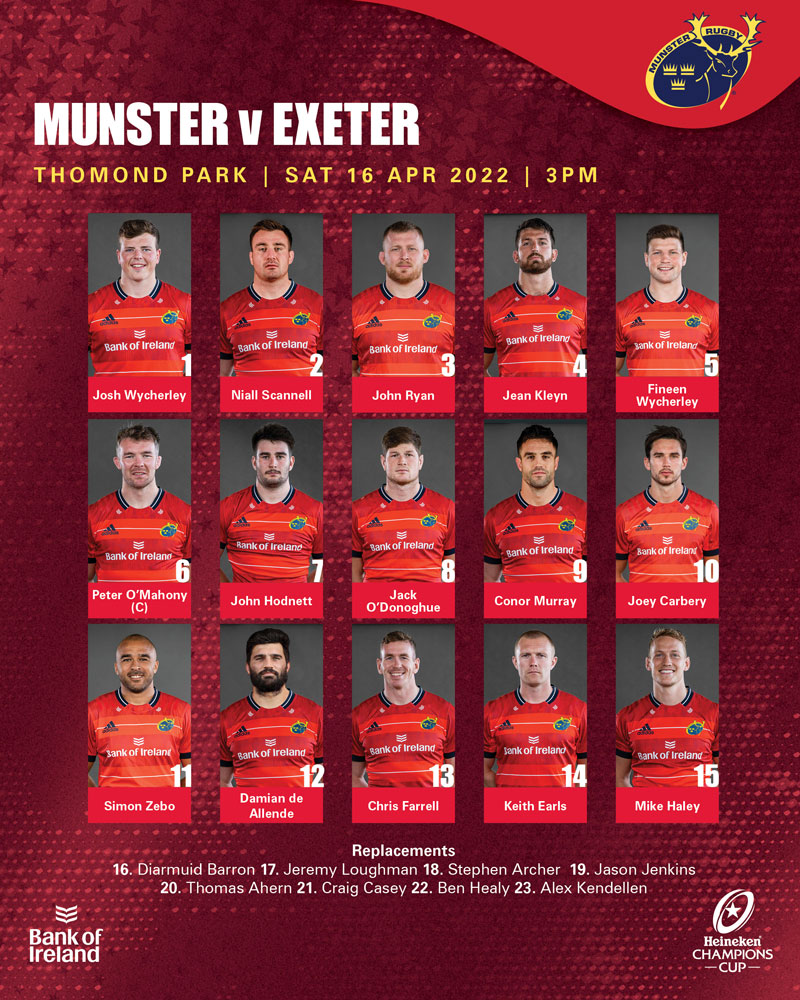 Mike Haley starts at full-back with Keith Earls and Zebo on either flank.

Damian de Allende and Chris Farrell continue their centre partnership with Conor Murray and Carbery in the half-backs.

Josh Wycherley, Niall Scannell and John Ryan pack down in the front row with Jean Kleyn and Fineen Wycherley in the engine room.  It’s the first time the Wycherley brothers start together in Europe.

O’Mahony, John Hodnett and Jack O’Donoghue complete the starting XV as a positional switch sees O’Donoghue move to no.8.

Stephen Archer is among the replacements and in line to make his 50th Champions Cup appearance.

Diarmuid Barron has recovered from illness to join the squad with Alex Kendellen moving to the bench having completed the return to play protocols.

Hear from Forwards Coach Graham Rowntree and Jack O’Donoghue ahead of the match. 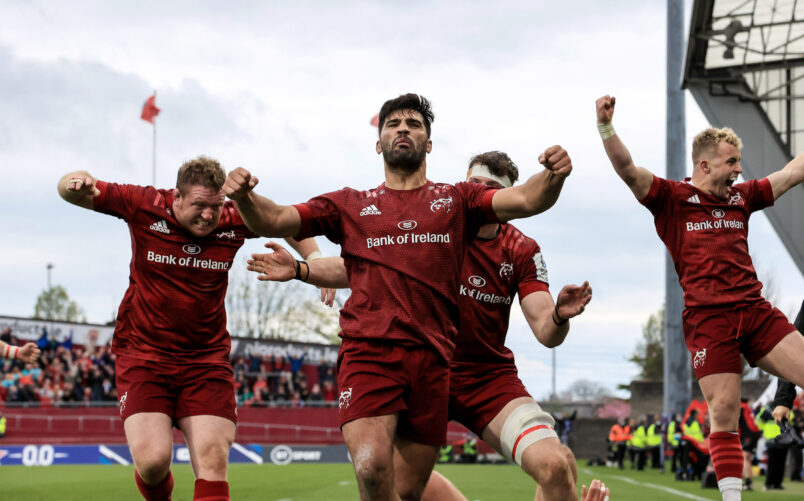 Munster are through to a 19th Champions Cup quarter-final after their 26-10 victory that clinched a 34-23 aggregate win over Exeter Chiefs at Thomond Park on Saturday afternoon.

There were a number of standout performers for Munster with Joey Carbery scoring a try and kicking 16 points with Damian de Allende clinching the win with a late try after a brilliant Simon Zebo pass.

The Star of the Match was Peter O’Mahony after a captain’s performance that included breakdown steals, lineout steals and a speedy pass to set up Carbery for the first try.

Exeter started well with the wind at their backs but an O’Mahony jackal on two minutes halted a dangerous attack before John Hodnett was taken out at the breakdown by an offside Exeter player.

Joey Carbery made it 3-0 after five minutes before a great defensive intervention from Damian de Allende, as he tracked back to catch Stuart Hogg’s chip over the top after a line break on the left wing.

Exeter hit the front on 10 minutes and it was a double blow for Munster as scrum-half Sam Maunder scored off a quick tap and Conor Murray was sin-binned for not retreating. Simmonds was off target with the conversion attempt

Mike Haley deputised superbly at scrum-half and the 14 men of Munster went 6-5 in front after Carbery’s second penalty on 17 minutes.

Munster were dominating the breakdown battle and Jack O’Donoghue won a turnover to see out the sin-binning period before Hodnett won back possession.

Carbery swung the ball wide for Earls to make a break up the right wing, his pass inside went to Exeter but O’Mahony was in to win the breakdown penalty.

Munster were in for their first try on 25 minutes as Carbery jinked over after O’Mahony’s pass off the base of the ruck. Carbery’s conversion made it 13-5 as Munster took the lead in the tie for the first time at 21-18.

Chris Farrell came up with a big tackle on Tom O’Flaherty before Simon Zebo nearly grabbed an intercept try but couldn’t hold onto the ball.

Simmonds was off target with a penalty on the stroke of half-time that would have levelled matters on aggregate.

Exeter piled on the pressure after the interval and Jacques Vermeulen just about grounded the ball from close range. Simmonds’ conversion struck the post but Exeter led 23-21 on aggregate.

The fantastic crowd of 21,132 really got behind Munster with the tie on a knife edge but Vermeulen got in over the ball to win the penalty for Exeter as Munster looked to build up a head of steam.

A crucial counter-rucking effort, led by O’Mahony, won the penalty for Munster on 59 minutes and Carbery’s third penalty moved the hosts 24-23 ahead on aggregate.

Carbery nervelessly slotted over from near halfway to make it 19-10 and 27-23 on aggregate when O’Donoghue was taken out by an offside player at the breakdown.

Replacements Thomas Ahern and Stephen Archer came up with big tackles as Exeter looked for the try that would move them back in front.

Vital maul defence and an O’Mahony turnover was followed by great fight from Earls at the breakdown to win a scrum near our 10-metre line.

Craig Casey dinked down the right wing to get back into Exeter territory before the crucial second try from de Allende.

Haley threw the ball wide for Zebo with the Exeter defence stretched and the winger charged towards the line before slipping a beautiful pass inside for de Allende to finish well.

Carbery was again on target and Munster held out for the final eight minutes to seal a great victory.

Munster are into a 19th Champions Cup quarter-final.

Peter O’Mahony was named Player of the Match. 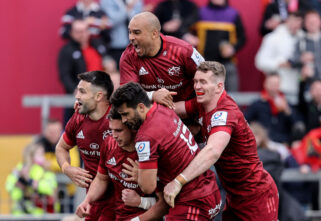 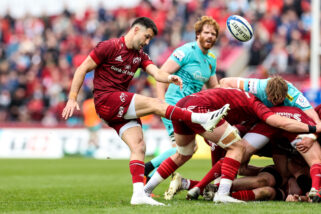 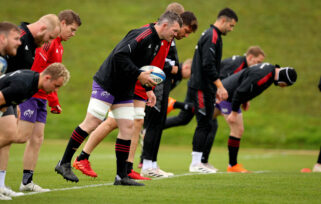 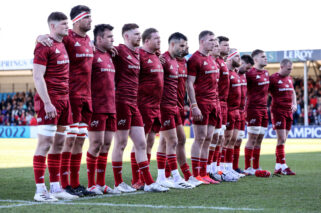 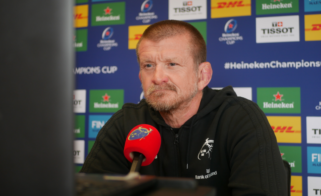 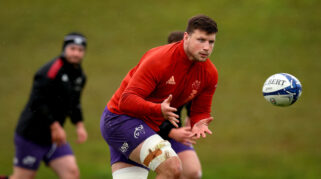 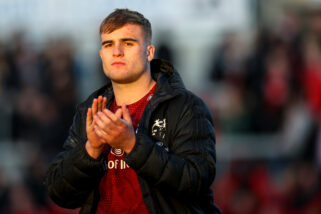 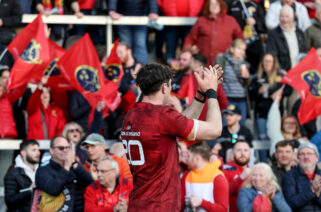 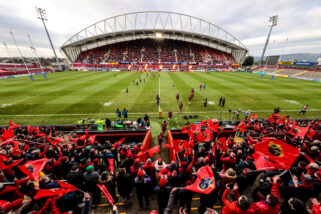 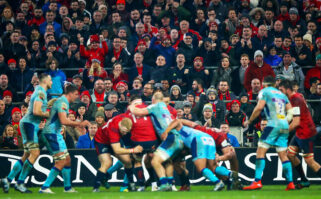