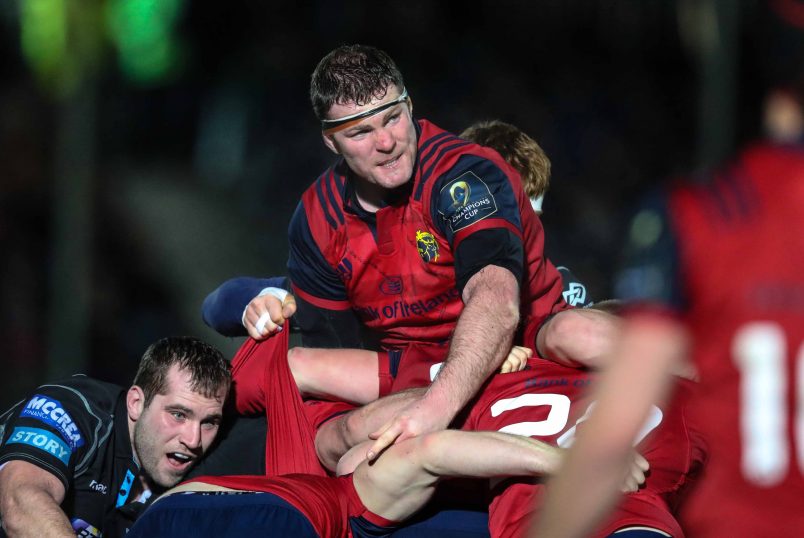 Donnacha Ryan will lineout for Munster at Thomond Park for the final time tomorrow. ©INPHO/Billy Stickland

Director of Rugby Rassie Erasmus makes no less than 12 changes from the side that defeated Connacht for tomorrow evening’s Guinness PRO12 semi final against Ospreys at Thomond Park – KO 6.15pm.

Returning to the starting XV, Donnacha Ryan and Francis Saili are set to line out in the red jersey at Thomond Park for the final time, while Billy Holland, Keith Earls and Andrew Conway are the only players retained from round 22.

Joining Holland and Ryan in the tight-five are front rowers Dave Kilcoyne, Niall Scannell and John Ryan, while in the back row Peter O’Mahony returns as captain with Tommy O’Donnell and CJ Stander completing the pack.

Conor Murray and Tyler Bleyendaal resume their half-back partnership, the former making his first start since returning from a shoulder injury.  Murray also draws ever closer to the century landmark for Munster and will make his 99th appearance this weekend.

Saili and Rory Scannell return to the midfield and the final change sees Simon Zebo re-join the back-three at fullback with Conway reverting to the wing and Earls remaining in situ on the opposite flank.

Having just signed new two-year deals with the province, both Ian Keatley and Jaco Taute are named among the replacements. 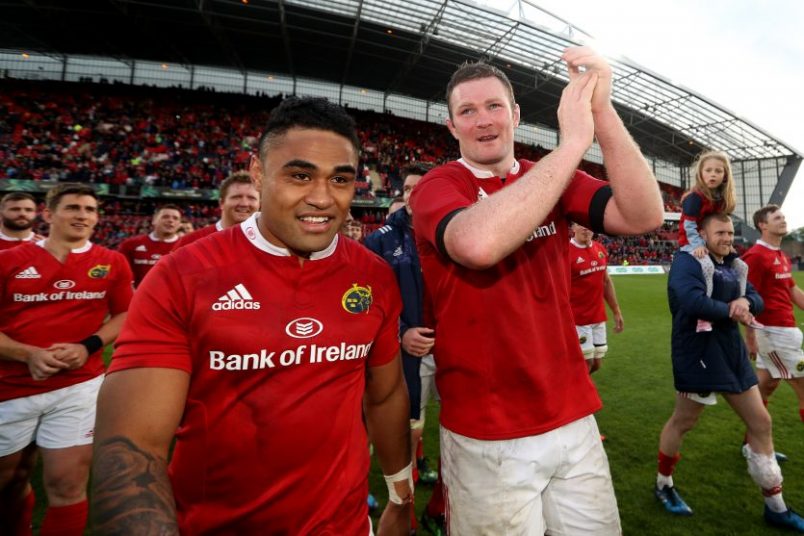 Munster will face Scarlets in the Guinness PRO12 final at the Aviva Stadium next Saturday after a hard-fought semi-final victory over Ospreys at Thomond Park this evening.

A first-half try from Man of the Match Francis Saili and an incredible second-half Simon Zebo effort clinched the win as Munster remain on course for a first PRO12 title since 2011.

Played in front of a vocal crowd of 18,332, a record attendance at the venue for a PRO12 semi-final, Ospreys really put it up to Munster but the hosts were able to answer all the Ospreys questions, and then some.

Ospreys made the better start and hit the front on seven minutes through a well-struck Dan Biggar penalty from the left flank after an Andrew Conway offside.

Francis Saili was then pinged for tackling Biggar without the ball and the out-half kicked deep into Munster territory but a knock-on by Ashley Beck let the hosts off the hook.

Bleyendaal and Zebo nearly produced a moment of magic as the out-half chipped behind the defence and Zebo manged to catch the ball on the volley but Keelan Giles blocked the kick and the danger was averted.

With much of the play taking place in the middle third, a well-placed Conway kick brought play into Ospreys territory but their lineout was solid and the danger was cleared.

With the lively crowd keen to drive Munster on, the forwards provided the surge the Thomond faithful were craving as they trucked the ball up the left flank in a rolling maul.

That drive gave Munster the impetus to cross for the opening try as Rory Scannell superbly held onto possession and somehow stayed infield with Saili on the spot to slice through from five metres with 25 minutes on the clock.

It was no less than the Kiwi deserved after a very impressive start with Bleyendaal unlucky to see his touchline conversion strike the post as Munster led 5-3.

Biggar looked to hit back immediately after a Conway high tackle but his penalty drifted just wide of the right hand post and Munster’s slender lead remained intact.

As the Ospreys continued to edge it in the territorial stakes, Munster ended the half on top after a scrum penalty on halfway was kicked to the right corner by Scannell.

Niall Scannell found Donnacha Ryan with the lineout and after Rory Scannell and Zebo nearly broke through, referee Luke Pearce brought play back for a Munster penalty with Bleyendaal making no mistake as Munster led 8-3 at the interval.

Once again, the Ospreys were in the ascendancy on the resumption but some excellent defence was forcing costly knock-ons for the Welsh side.

Forward power was once again to the fore for the hosts as Munster first won a scrum penalty to relieve the pressure. Then a superbly executed lineout and rolling maul ended with Niall Scannell peeling away to surge into the Ospreys 22.

A clever Bleyendaal chip pinned Ospreys back to within five metres of their own line but the hosts were back on the front foot after a loose Munster pass with Peter O’Mahony making an outstanding recovery tackle at the other end of the field.

The next score was always going to be crucial and CJ Stander was held up over the line after more superb work by the pack.

Munster then produced an absolute moment of magic to all but clinch their place in the final with a try of the season contender.

The score was initiated by the retreating Earls as he gathered an Ospreys hack clear on his own 22.

After getting an offload away to Saili under severe pressure, the New Zealander then popped the ball inside for Conor Murray to break clear up the left flank.

Earls had tracked the play and scrum-half Murray then released the winger to race clear before he passed back inside to Conway, who in turn gave one more pass to Zebo, who juggled the ball briefly before diving over for an incredible score just past the hour.

Bleyendaal smacked over the conversion and with 18 minutes to play, Munster led 15-3 with the final in their sights.

A second Bleyendaal penalty made it 18-3 in the 67th minute before Conway finished brilliantly in the right corner after replacement Duncan Williams went down the blindside of a scrum.

Now out of sight, Munster saw out the remaining minutes on the back foot with a Giles foot in touch preventing the Ospreys from scoring in the last play with the covering Saili forcing the winger into touch before he could touch down.

The crowd stayed on long after the final whistle to pay tribute to Ryan and Saili after their final games in red with the Red Army set to invade Dublin once again next Saturday.

PRO12 Semi-Final Round-Up:  Munster are into their first Guinness PRO12 final since 2015.

Donnacha Ryan and Francis Saili played their final games at Thomond Park for Munster this evening as the duo move on in the summer.

Conor Murray made his 99th appearance for Munste, making his first start since returning from a shoulder injury sustained during the 6 Nations.

James Cronin was a late withdrawal from the squad with a back injury, while Keith Earls and Andrew Conway picked up respective shin and shoulder knocks, however Rassie Eramus was hopeful none of the trio would be an injury concern for next week’s final. 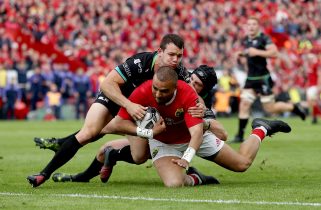 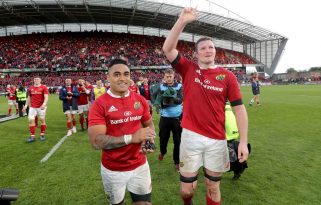 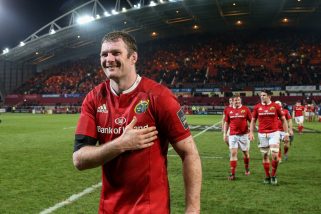 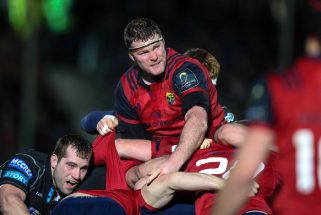 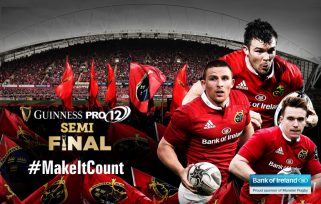 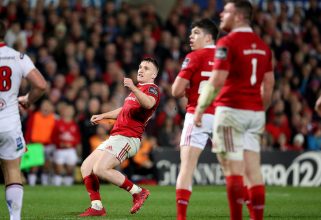 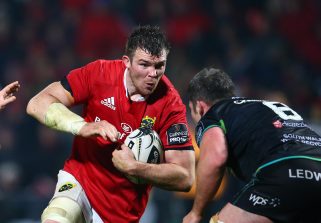 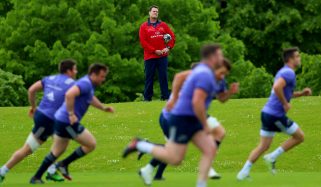 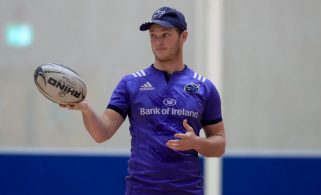