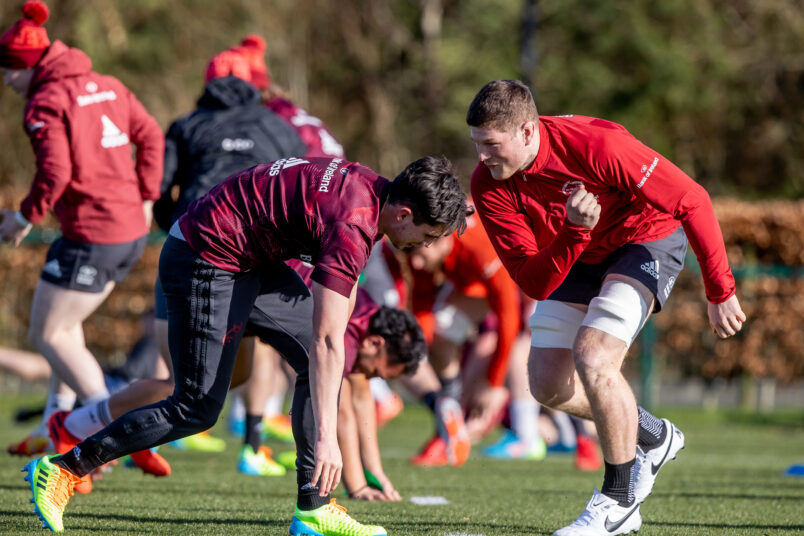 The Munster team has been named for Friday night’s Guinness PRO14 clash against Cardiff Blues at the Cardiff Arms Park (8pm). 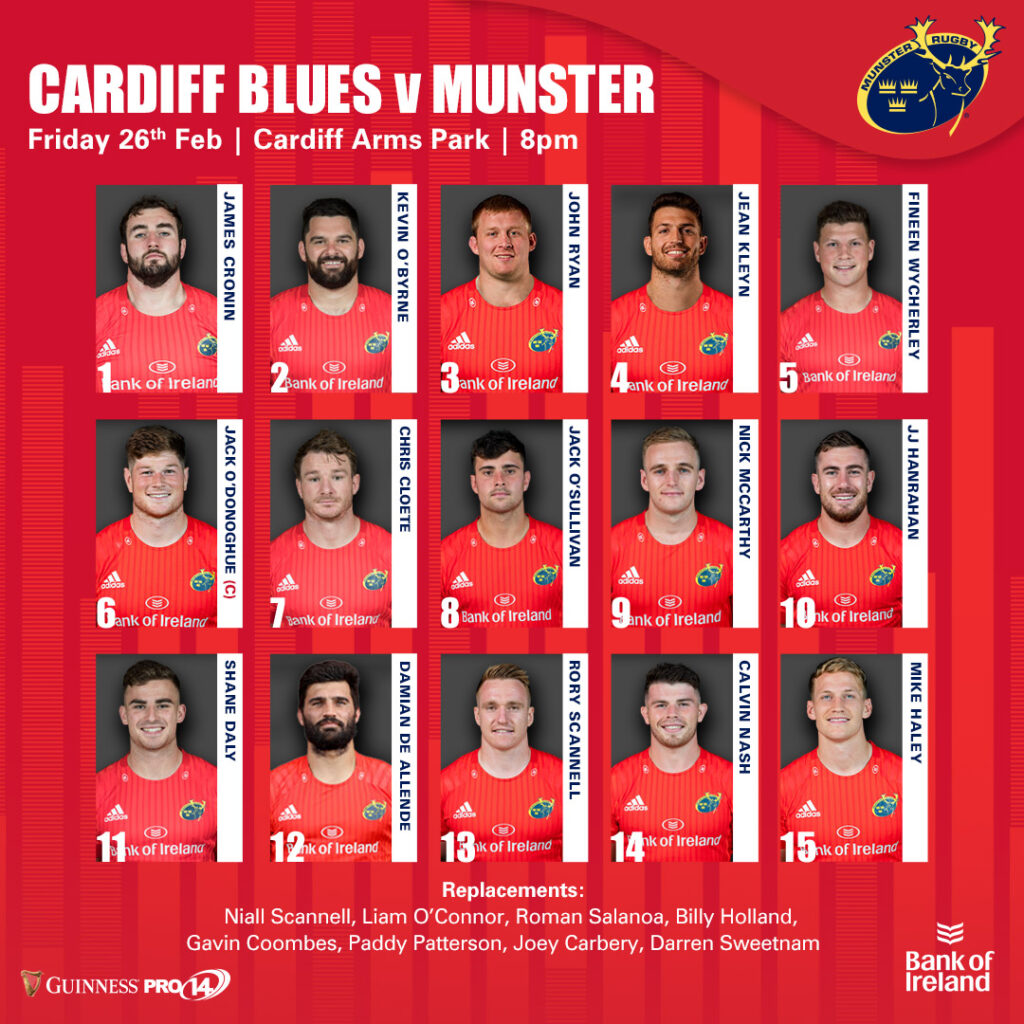 There are six changes to the starting XV that defeated Edinburgh last time out, while in the replacements there is the welcome return of Joey Carbery who is named in his first match-day squad since January 2020.

The opening try scorer in Murrayfield last weekend, Jack O’Donoghue captains the side for Friday night’s encounter as he and Chris Cloete are joined by Jack O’Sullivan in the back row.

Fineen Wycherley scrums down next to Jean Kleyn in the engine room with Kevin O’Byrne stepping into the front row in between James Cronin and John Ryan.

Shane Daly returns from Ireland camp to retain his position on the left wing with Calvin Nash named on the opposite flank as Mike Haley completes the back three at full-back.

The centre partnership sees Rory Scannell lining up next to Damian de Allende and Nick McCarthy joins JJ Hanrahan in the half-back pairing.

If sprung from the bench Billy Holland will move ahead of Ronan O’Gara for all-time Munster appearances and become the second most capped player for the province for his 241st appearance in red.

Paddy Patterson is in line to make his Munster debut as he provides the scrum-half cover.

Find out you need to know ahead of the game here.

Player News: Academy lock Thomas Ahern was unavailable for selection after picking up a knock in training this week.

Hear from Defence Coach JP Ferreira and Liam O’Connor ahead of the game. 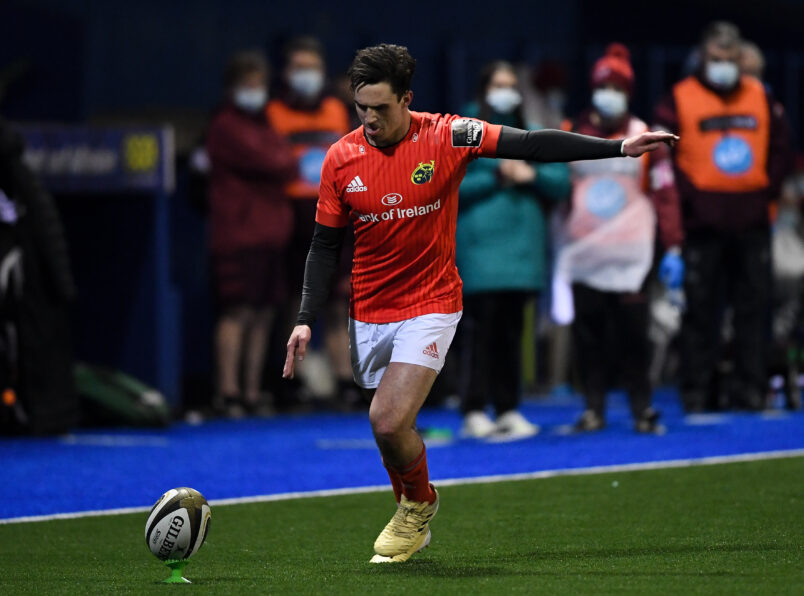 Joey Carbery kicks a conversion on his return to action. Inpho

It was a gritty victory over a Cardiff side that were excellent at the breakdown all night but Munster’s quality shone through to secure another vital win.

Johann van Graan’s side remain nine points clear at the top of Guinness PRO14 Conference B with all of Munster’s final three games taking place at Thomond Park.

Joey Carbery made his eagerly-waited return as a replacement and struck a sweet touchline conversion in the final minutes.

Jean Kleyn and Niall Scannell were the Munster try-scorers with JJ Hanrahan setting up Kleyn’s try and adding eight points off the tee.

Scannell’s late try was the result of a monster Munster maul that travelled 20 metres up the right touchline before grinding over the line.

Munster were playing some inventive rugby in the opening quarter but the Cardiff defence had all the answers with the hosts coming up trumps on each occasion Munster reached their 22.

Great work from Jack O’Donoghue halted an early Cardiff attack after scrum-half Jamie Hill intercepted and kicked in behind. The flanker did brilliantly to race back and collect the ball before handing off a defender and kicking clear.

Calvin Nash was next to come up with an important defensive intervention as he brought down Aled Summerhill after a slick Blues move.

Seb Davies scored the opening try on 11 minutes as he collected a flat pass to run through and score. Ben Thomas’ conversion struck the post and Cardiff led 5-0.

Davies was then yellow-carded after 17 minutes for a dangerous entry into the ruck to clear out Shane Daly.

Nick McCarthy, James Cronin, Kevin O’Byrne and Jack O’Sullivan all carried well as Munster launched a promising attack on 26 minutes and a Cardiff offside was punished by Hanrahan’s first penalty.

A Thomas penalty increased the Cardiff lead but Hanrahan hit back with his second penalty just before the break to cut the margin to two points, 8-6.

Munster won a big scrum penalty on 42 minutes but Hanrahan hit the post from a long way out on the right and Hill did well to gather and escape his in-goal area.

Fineen Wycherley won a big turnover for Munster following the next Cardiff attack as the lock made up for his poor initial pass that had given Cardiff possession.

Jack O’Sullivan was then pinged for not releasing as he went for the jackal and Thomas kicked Cardiff into an 11-6 lead after 52 minutes.

Munster hit back with the province’s first try on 54 minutes as they finished clinically after another promising attack.

Hanrahan was the creator as he chipped over the Cardiff midfield defence and regathered to get Munster into their 22.

Replacements Liam O’Connor and Roman Salanoa were both involved as Munster went through the phases before Jean Kleyn powered over.

The Cardiff jackal proved effective once again as they won a penalty on halfway shortly after. Thomas’s strike was short but Cardiff were awarded a five-metre scrum as Munster were offside on the clearance kick.

Fantastic work from the scrum won the penalty for Munster but hands in the ruck from Chris Cloete shortly afterwards gave Thomas another opportunity but his penalty struck the post.

The game was in the balance going into the final 10 minutes with vital turnovers from Cloete and replacement Gavin Coombes, along with another important scrum penalty keeping Munster in control.

The visitors finished strongly and marched an outstanding maul over the line from a huge distance with replacement Carbery, who was introduced after 63 minutes, draining the touchline conversion for a 20-11 victory.

Billy Holland made his 241st Munster appearance to move into second place on the all-time list of appearance holders behind Donncha O’Callaghan (268).

Joey Carbery made his first appearance since January 2020.

Replacement Roman Salanoa was replaced after 72 minutes as he departed for a HIA. 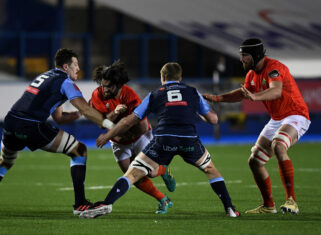 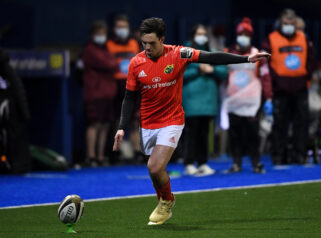 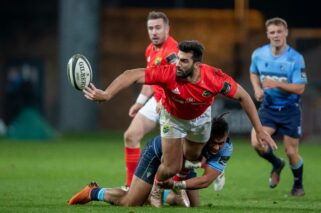 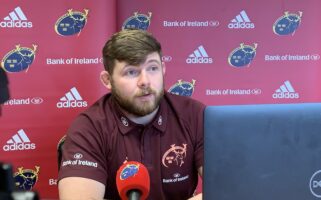 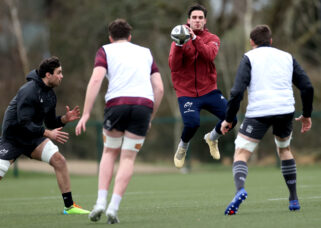 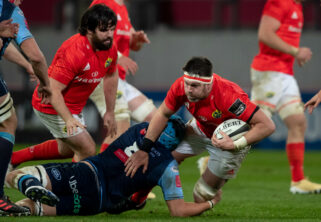 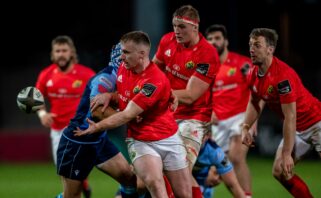