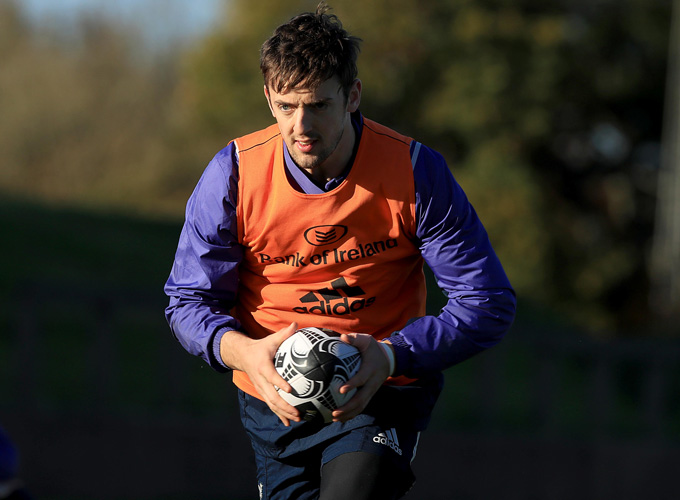 Director of Rugby Rassie Erasmus has named his side for tomorrow night’s Guinness PRO12 clash with Dragons in Irish Independent Park at 7.35pm. Tyler Bleyendaal retains the captaincy while local man Darren Sweetnam makes a welcome return to the starting line-up following a knee injury.

In total five changes are made to the side that defeated Edinburgh while Dave Kilcoyne, Tommy O’Donnell, Rory Scannell and Andrew Conway have all been made available from the Ireland 6 Nations camp for tomorrow night’s game in Cork.

O’Donnell returns to the back row at openside with Dave O’Callaghan and Jack O’Donoghue taking charge at 6 and 8.

Duncan Williams and captain Bleyendaal again form the half-back partnership and, in a fully changed midfield, Jaco Taute reverts from fullback to resume his partnership alongside Scannell.

Crossing for his sixth try of the current PRO12 campaign last weekend, Ronan O’Mahony remains on the left wing with the final two changes seeing Conway and Sweetnam re-join the back three. Cork native Sweetnam makes his first appearance since injuring his knee in Munster’s win over Leinster on St Stephen’s Day. 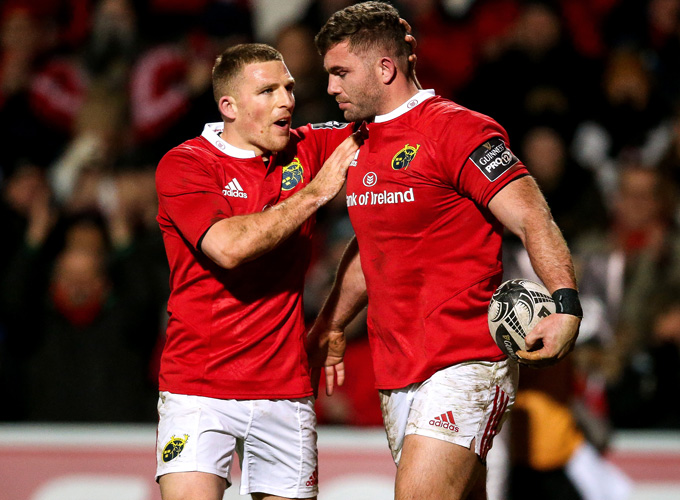 Munster ran in six tries in consolidating their place at the top of the Guinness PRO12 table, defeating Newport Gwent Dragons 45-17 in front of a capacity crowd at Irish Independent Park – Munster’s seventh sell-out of the current season.

Tyler Bleyendaal and Doran Jones traded penalties before Jaco Taute crossed for his first try in Cork, doing so with 13 minutes played and bringing the vocal Irish Independent Park faithful into the game. They were given even more reason to cheer when Bleyendaal turned defence into attack in a move that Andrew Conway finished off sublimely with a quarter played. Taute then secured his brace before the half hour mark as Munster demonstrated a real clinical edge in attack. A Rhys Buckley try late in the half looked to keep Dragons in touch but a penalty try for Munster on 40 minutes left them with an even steeper mountain to climb – Munster leading 31-10

Darren O’Shea saw the sin bin on 55 minutes for a no-arms tackle and Dragons took advantage, piling numbers into the maul for Elliot Dee to touch down. But Munster’s reply was swift through Dave Kilcoyne and from there the game was never in doubt. Ronan O’Mahony continued his welcome habit of scoring tries for fun in Irish Independent Park and added further gloss to the scoreboard with Munster’s sixth in the final minute.

Applying all the early pressure, Munster threatened the Dragons on no less than three occasions before the first penalty came their way – Bleyendaal got things up and running on the scoreboard. It was a sign of things to come from the playmaker whose kicking was on-point all night, both from hand and off the tee, kicking seven from seven.

It was all too easy for Dragons soon after however, Tyler Morgan dancing through the Munster defence and into the 22 where last ditch defence would see Munster infringe and allow Jones level affairs on eleven minutes.

Looking threating from the off, Erasmus’ men soon delivered on their promise, pummelling through the phases from right to left – Rhys Marshall making a couple of standout carries – before taking advantage of numbers left and there was no stopping Jaco Taute as he powered through the gap. Bleyendaal made it a full seven point return.

The pick of the tries came on 20 minutes, Bleyendaal intercepting inside the Munster 22 and oozing class with a perfectly weighted kick downfield where it was a footrace between Jones and Andrew Conway, the latter winning and dotting down for Munster’s second. It was fitting that Bleyendaal slotted the extras.

Penalties we’re easy to come by for Munster as they continued to apply huge pressure on Dragons, the hosts kicking to the corner each time. Making headway through the maul and subsequent phases, Taute ran another hard line at close range to the breakdown and barged over to secure his brace. Bleyendaal was again on target with the conversion.

Dragons, in danger of losing sight of Munster, rallied and crossed for through an impressive lineout maul on 36 minutes, Rhys Buckley touching down, although credit must go to Munster’s valiant defence which kept the Welsh attack at bay for over ten minutes of relentless pressure along the Munster tryline.

But the province would give Dragons much to ponder in the dressing room at half time as they bagged the bonus point try on the stroke of half time. Fullback Carl Meyer was sin binned for a deliberate knock on as Munster attacked down the left flank after the in-form Rory Scannell was held up just short. With the assistance of the TMO, referee Mike Adamson deservedly awarded a penalty try and Bleyendaal added the easy two to lead 31-10 at half time.

Threaten as they might Munster failed to make the extra man count upon the resumption and instead it was Dragons who made the most of numerical advantage when Darren O’Shea saw yellow. Like before, the victors were clinical through the maul, this time replacement hooker Elloit Dee scoring with Jones converting.

Comeback on? Far from it as Munster immediately found themselves back in the opposition 22 and, going through the phases, Dave Kilcoyne sniped at close range – bringing his Irish Independent Park try tally to three for the season to date after scoring a brace against Ospreys in November. Bleyendaal bisected the posts with the touchline conversion.

Sevens speedster Dan Goggin produced sensational stepping down the right wing, only to be called back for a foot in touch after he crossed the whitewash, but Ronan O’Mahony did produce the icing on the cake in the final play, speeding through the tiring defence for yet another try in Irish Independent Park and his seventh of the current PRO12 campaign.

Guinness PRO12 round 14 round up. The win sees Munster remain top of the Guinness PRO12 table, just two points clear of Ospreys who they face in Wales next Saturday at 5.15pm.

On the week of his 23rd birthday, excellent work around the park and at the breakdown saw Jack O’Donoghue named man of the match.

On the injury front, Erasmus conformed that Andrew Conway and Dave Foley were both removed for Head Injury Assessments while Jean Kleyn is to be assessed further for a knock to his neck.

Darren Sweetnam made his return from a knee injury sustained in the win over Leinster on St Stephen’s Day, while from the academy ranks, Dan Goggin, Conor Oliver and Brian Scott all saw game time this evening.

On the club front, Young Munster’s Abrie Griesel made his second senior appearance for the province.

Munster return to Thomond Park to play Scarlets in the Guinness PRO12 on Friday February 24th at 7.35pm.

Start your weekend cheering on Munster under Friday-Night-Lights! 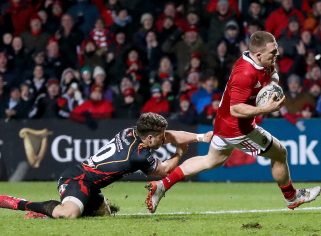 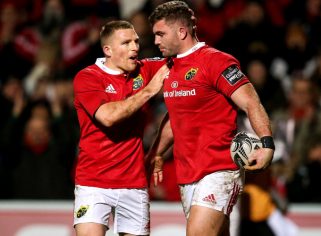 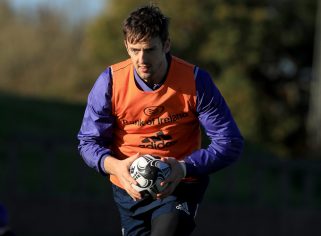 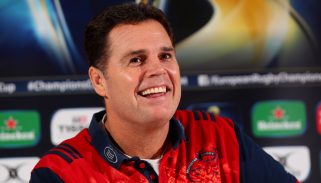 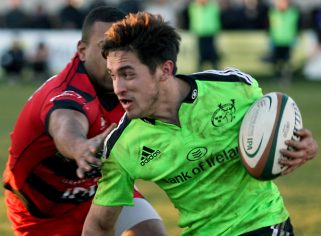