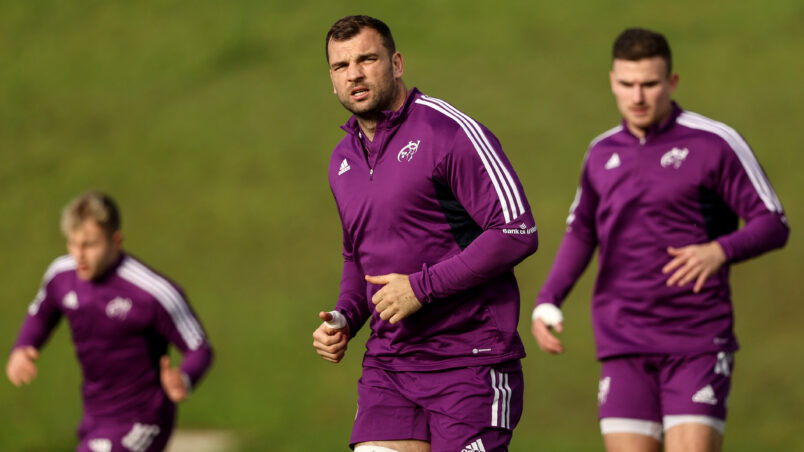 The Munster team has been named for Saturday night’s United Rugby Championship Interpro derby against Connacht at Thomond Park (7.35pm).

Match tickets are available to buy online here or from the stadium on match day. A family pack of four tickets costs just €40 with Stand tickets from €15 for juniors and €30 for adults.

Tadhg Beirne, who was named in World Rugby Men’s 15s Team of the Year earlier this week, starts on his 50th Munster appearance with Peter O’Mahony captaining the side as Joey Carbery, Craig Casey and Calvin Nash also come back into the team after returning from Ireland camp.

Jean Kleyn returns from injury and Alex Kendellen starts at no.8 as Head Coach Graham Rowntree makes seven changes to the side that beat the South Africa Select XV at Páirc Uí Chaoimh.

Rory Scannell and Antoine Frisch, who makes his first BKT URC start, continue their centre partnership with Casey and Carbery in the half-backs.

Josh Wycherley, Diarmuid Barron and Roman Salanoa keep their places in the front row with Kleyn and Beirne in the engine room.

O’Mahony, John Hodnett and Kendellen start in the back row.

Jeremy Loughman and Jack Crowley return from international camp and are included among the replacements with John Ryan back from representing the Barbarians.

Greencore Munster Rugby Academy lock Edwin Edogbo is also included among the replacements and is set for his seventh appearance of the season.

Hear from Munster Attack Coach Mike Prendergast and hooker Diarmuid Barron ahead of the game. 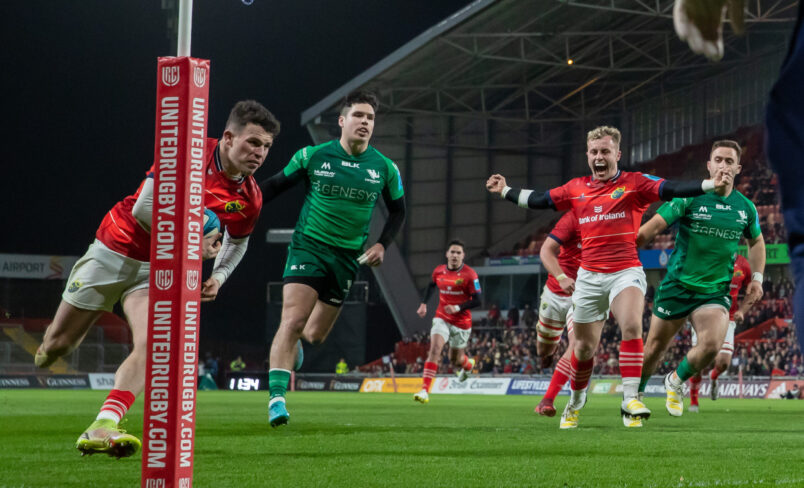 Munster secured a bonus-point win over Connacht at Thomond Park on Saturday night to make a good start to the 10-game block of fixtures.

The scoreline was 10-all at half-time but Munster were well on top after the break to move 24-10 in front before a late Connacht try kept the game alive but Munster managed the finish minutes well.

There was a minute’s silence before kick-off in honour of the late Jerry Holland, a legend of rugby in Munster, who passed away earlier this month.

Munster played against the wind in the first half and Jack Carty kicked Connacht into a 3-0 lead after nine minutes when Alex Kendellen saw him pinged for not rolling away.

Nash was in for the first try in the right corner two minutes later as Craig Casey went down the short side and laid it on a plate for the winger to finish in the corner.

A Connacht scrum penalty on 17 minutes gave the visitors a great attacking platform as Carty kicked to the left corner.

Step forward the Munster pack as they stopped the maul and then won a scrum penalty for good measure to relieve the pressure.

The visitors scored next as a kick in behind was gathered by Shane Daly and Munster looked to attack from deep but Byron Ralston intercepted Mike Haley’s pass to score under the posts. Carty converted to make it 10-5.

Munster made it 10-all when the pack mauled over and Salanoa touched down for his second Munster try with Carbery again off target with the conversion.

Graham Rowntree’s side again went to the corner just before half-time but the Connacht defence withstood the pressure and it was even at the break.

Connacht were down to 14 for 10 minutes early in the second half as Joey Carbery went on a slaloming run and chipped over the top. John Porch blocked him and was sent to the sin bin.

Down to 14, Connacht defended very well with Casey held up over the line for a goal-line drop-out.

Replacement John Ryan won a big turnover for Munster after 55 minutes and when John Hodnett was tackled in the air, we went to the corner.

Munster mauled forward and John Ryan eventually scored after a series of drives from close range. Carbery converted and Munster led 17-10 after 59 minutes.

Niall Scannell was in for the bonus-point try on 65 minutes as the pack mauled over for Niall Scannell to touch down. Carbery converted to make it 24-10.

Connacht came back strongly and won a series of maul penalties to gain field position with Kieran Marmion diving over from close range to keep the game alive. Carty’s conversion made it 24-17 with six minutes to go.

Munster managed the remainder very well to see out the game for an important bonus-point win.

Mike Haley and Peter O’Mahony both departed for HIAs.

Antoine Frsich and Roman Salanoa both made their first URC starts for Munster.

Tadhg Beirne was named Player of the Match on his 50th Munster appearance.