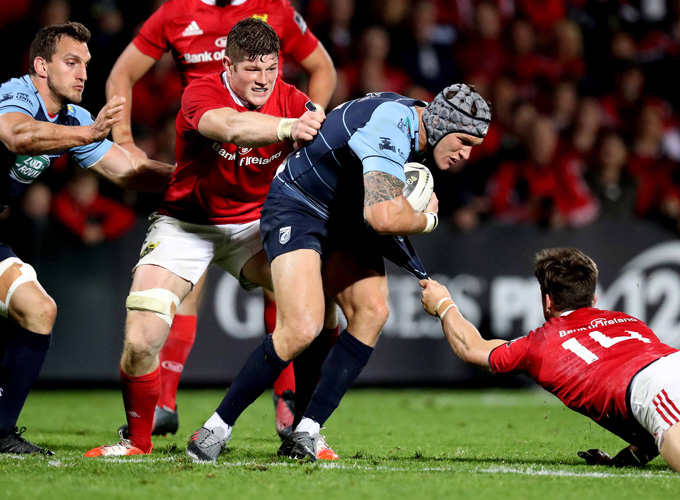 Munster’s previous three trips to Wales this season have proven fruitful, but Cardiff will look to halt the province’s march on Welsh soil as both sides vie for valuable Championship points with just six rounds left to play.

None of the aforementioned wins came easy and it was Jacques Nienaber’s defence that was the hallmark of the performance in round 1 where Munster recorded their first win at Parc y Scarlets since April 2011. Despite limited chances, the visitors managed to cross on two occasions, and try as Scarlets might, bar one touchdown on 31 minutes, there was no way through for the hosts. With Munster forcing turnovers and winning the lion’s share of the penalties, kicks from Tyler Bleyendaal and Ian Keatley ensured the ideal start to Rassie Erasmus’ tenure as Director of Rugby.

A fortnight later Erasmus’ men travelled to Rodney Parade and were somewhat fortuitous in sneaking a win. In the final play of the game, Dragons worked up a head of steam through their maul, bulldozed into the Munster 22 and had the tryline at their mercy. Had they marched on, victory was theirs, but instead opted to go wide and the chance went a begging.

Then, as recently as round 15, Munster defied the odds in overcoming an eleven point deficit to hand high flying Ospreys their first home defeat of the season at the Liberty Stadium. Tries from Jack O'Donoghue and Francis Saili gave the province hope in the second-half and Dave Kilcoyne stretched to touch down late on and sealed the win.

No shortage of motivation for the Muntermen this weekend where third meets seventh in the Welsh capital. Not only will Munster have ambitions of retaking top spot on the Guinness PRO12 table, but it was Cardiff who turned over the men in red in their first home game back in round 2, a late Dan Fish try and Steve Shingler conversion proving the difference as the Welsh side just shaded it on a 23-24 scoreline.

Nor will Munster have fond memories of their last visit to Cardiff Arms Park. With the bonus point win secured for Danny Wilson’s men, an O’Donoghue try on 78 minutes at least looked to have salvaged a losing bonus point for Munster, only for Jarrod Evans to slot a penalty in the final kick of the game, denying Munster any return on their efforts.

While last weekend’s loss to Scarlets ended Munster’s streak of nine games unbeaten in the PRO12, Cardiff enter Saturday’s encounter looking to make it three wins on the bounce, putting 50 points on Treviso before, like Munster in round 13, grinding out a one-point win away over Edinburgh at Myreside.

In previewing Saturday’s game, Erasmus commented, “Look you are away from home and Cardiff are one of the teams that beat us in one of the four losses we had this season. Now we are playing away from home and we have to recover from last week’s loss. It will be a tough week and a tough challenge over there and personnel wise we’ll maybe get Rory Scannell back and might have Robin Copeland available so it’s going to be a mixed bag of a week. It’s going to be a tough challenge for us.”

Cardiff for their part are in the hunt for a play-off berth and Champions Cup qualification. Hence Danny Wilson’s men are targeting nothing short of a win to finish out the current block of games. The Cardiff Head Coach also spoke with media this week.

“We targeted three wins out of four games. We slipped up in the first game against Connacht at home, which has put a bit of pressure on this last one against Munster.

“Now we really want to achieve that goal and objective to give ourselves the opportunity to be in that top six. We know it's tight and tough to stay in touch with the top six but we remain motivated to finish the season in that position.

“We've dropped one or two games at home which we've been really disappointed with when compared to last season, but we've certainly improved our away record and Friday night resembled that.

“There was a big commitment and fight from the boys, in the latter stages of what was a really tight game, to get over the line and hopefully we can carry that into a big game against Munster.”

Not since 2007/08 have the Blues achieved a season’s double over Munster, while the province have not lost away from home in the Championship since Leinster beat them at Aviva Stadium on October 8th.

In terms of Cardiff’s home record in the campaign to date, it’s a case of won four, lost four with, incidentally, three of those losses coming at the hands of the Irish provinces.

Next Home Game
Munster's next game at Thomond Park sees them host European giants Toulouse on Saturday April 1st at 5.45pm in the quarter final of the European Champions Cup.