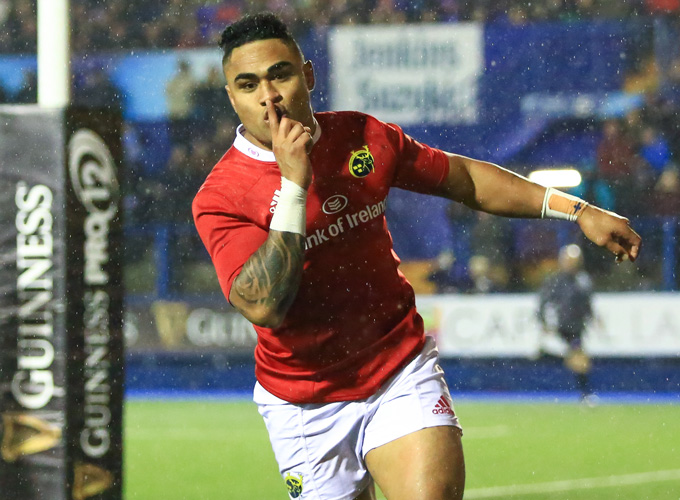 Despite the victory, Munster remain in third on the Guinness PRO12 table after Leinster and Ospreys both recorded wins at home to Scarlets and away to Edinburgh respectively.

Munster, who dominated the possession stakes, failed to convert many of their chances. Director of Rugby Rassie Erasmus spoke after the game and although disappointed with his side’s lack of precision, was buoyed by their determination to grind out a win.

“It was not a good performance. It was actually a dreadful performance because of the weather, but we were gutsy.

“Relieved is the word to describe it. It was a see-saw game and with the conditions it could have gone either way. But the guys showed a lot of composure and I’m happy with the win.

“I was nervous all the time, even when we were 10 points ahead late on and we had a kick charged down. It was probably not one of our best performances, but emotionally and belief-wise it was a great display.”

Munster now enjoy a two week break from PRO12 action after which it’s very much full steam ahead in the business end of the season with every score and result now crucial to the race for a home semi-final.

“The next seven or eight weeks are going to be nerve-wracking. All the top teams in the league are playing each other and at this stage of the season we’re trying to stay in both competitions. By doing that we have to experiment and rotate with a couple of younger guys. While we’re doing that we’ll win some games and lose others.”

Erasmus will take a keen interest in this weekend’s British and Irish Cup quarter final where Munster A host Ulster A in Irish Independent Park on Sunday at 3pm.

“We’ve got a few bumps and bruises. We’ll assess those in the next few days, but we have an important game coming up which is a quarter-final so some guys will get an opportunity in that. It’s a game we want to win.”