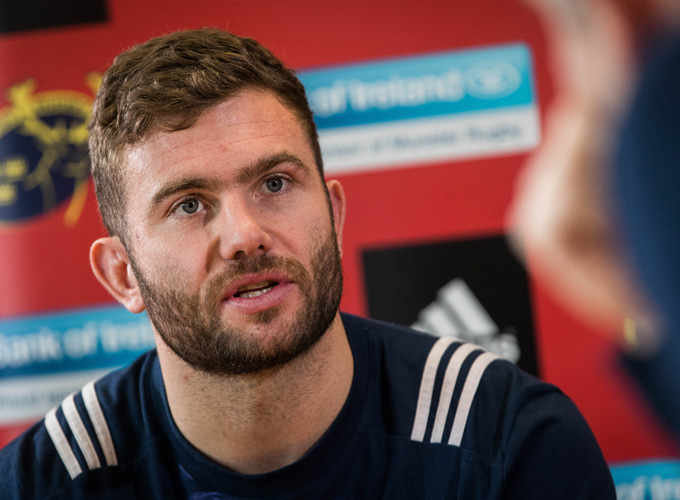 Reflecting on last weekend’s loss to Scarlets where Munster let go a 21-6 half time lead to ultimately finish the game with no return for their efforts on the PRO12 table, Jaco Taute cites ‘definitely fixable’ errors as the cause of Munster’s first downfall at Thomond Park this season.

Reeling from the loss that also saw them slip to third in the Championship standings, Munster now hope to return to winning ways in Cardiff this Saturday at 5.15pm. Taute met with media this week in previewing the game.

“Yes definitely I thought we did pretty well to go 21-6 up in the first half and then in the second half we made some errors and that cost us territorial possession. Rugby is such a special game in that momentum can swing so easily. A few mistakes by us and the momentum totally swung with Scarlets and they capitalized on that and scored their tries.

“We needed to be a bit sharper at times, maybe didn’t play the correct game and they just crept back into the game. We didn’t make it easy for ourselves by giving them good set pieces in our half. That makes it difficult so we’ve only got ourselves to blame, but it’s definitely fixable, definitely fixable.”

Looking to make it three wins on the bounce – defeating Treviso and Edinburgh – the hosts enter this weekend’s encounter chasing their first season’s double over the province since 2007/08 having defeated them in Irish Independent Park back in September.

“Definitely it’s going to be a tough game over there, they’re a very good side. They’ve beaten us this season already so we’re definitely going to be up for the challenge. Forget about talks of a home semi final, that’s too far in the future, we think about this Saturday only, we need a win to close off this block of games. It’s a tough game so we look forward to it. I’m glad it’s an all-weather pitch and if the weather allows it we can play a nice game of rugby over there.

“[All weather pitches] are actually better when it gets the rain as regular pitches are all wet and muddy. I love it. It makes it easier.”

Not only was last weekend Munster’s first loss in ten PRO12 games, but not since their loss to Leinster at the Aviva Stadium in October had they failed to pick up at least a losing bonus point. A somewhat somber mood ensued in training earlier this week, but Taute backs the resilience of his side to really put it up to Cardiff come kick-off on Saturday.

“I think it’s a different mood, we’re not used to losing that much this season so it’s different but we’re a team that sticks together through the good and bad times. We don’t like losing and we certainly didn’t take the loss very lightly. All positive chaps here though and we’ll jump back on the horse down in the training pitch and well learn from it, put it behind us and give it our best come Saturday.”