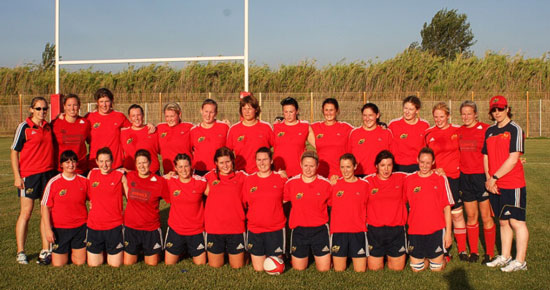 The Munster Schools U18s and U19s and Munster Women’s squad have all returned from successful pre-season tours abroad last weekend.

Winning Ways in France for the Munster Women

The Munster women’s squad enjoyed a successful pre-season tour to the South of France last weekend. In winning both of their challenge games the tour provided the perfect outlet to view squad progression, and the side can now develop from the invaluable match practice in looking ahead to the Women’s Interprovincial Championships.

The comprehensive win provided great motivation for Saturday’s closer tie against French division one champions Montpellier. In a more evenly contested game the squad’s defence proved their forte on the night as they kept the French champions scoreless, with Munster’s points coming from a Laura Guest try and a conversion and two penalties from the boot of Niamh Briggs, giving the visitors a 13 nil victory.
The squad will continue to train over the next few weeks as players compete with their respective club sides in the domestic league. They will then resume provincial action when they line out against Ulster on October 17th as they start the defence of their Interpro winning title.

The Munster U18 and U19 schools were both in action last weekend with the U18s in Manchester playing the Sale Sharks Academy and the U19s in Birmingham playing the Moseley Colts.

The Munster Schools U19s overcame the Moseley Colts in Solihull, Birmingham winning 18-6. Scorers for the U18s included Peter Murray and Ronan Barry with a try each, and Padraig O’Connor kicked 2 penalties and 1 conversion.

Next up for the schools is a challenge game this Saturday the 5th in CIT, when both sides come up against each other, ko11am.