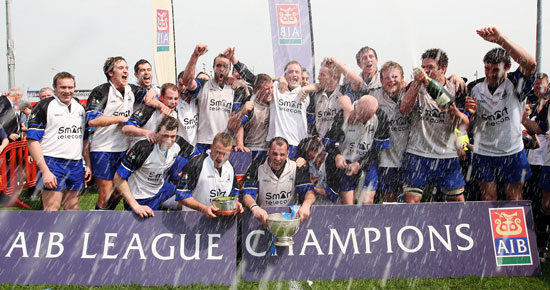 The meeting of the top two sides in the AIL is sure to attract a large crowd to Temple Hill on Tuesday as Shannon will be bidding to move to the top of the table with a victory over current leaders and defending champions Cork Constitution. Games between these sides are always very close and this encounter is likely to have little between them at the finish.

Garryowen travel to Templeville Road to take on St. Mary’s, knowing that a win would be a big step towards claiming a semi final place. A victory would see them open up a gap and with only three games remaining the Limerick side would be well on their way to securing yet another top four finish.

The Munster Junior Cup continues this weekend with the remaining three quarter final ties down for decision, as Tralee are already through to the semi finals following their win over Kilfeacle last Sunday.

Cork Constitution continue their defence of the trophy in the tie of the round as they entertain U.L. Bohemian at Temple Hill. Con’ have been very inconsistent this season and will have to be at their best to over come this challenge. The Limerick side are the only team to defeat Cashel this season with a 17-15 win in their first outing and easily accounted for Ennis in the last round. They will want to make amends for last season’s defeat and could Con’s interest in this year’s competition.

Richmond are the only Junior Club side in action in this competition this weekend and they will have to make the most of home advantage against U.C.C. as they aim to join fellow Junior Club Tralee in the semi finals. College are favourites to win the trophy and after easy wins over Kanturk and Mallow they should have something to spare to book their semi final place.

Elsewhere, Garryowen take on Nenagh Ormond at Dooradoyle. Garryowen hope to give Gerry Hurley his first outing of the season and he should bolster the Dooradoyle challenge. Garryowen have needed replays to see off both Shannon and Clonmel in their previous rounds. The Tipperary side have relied on the boot of Dan Fogarty to see off the challenges of Thomond and Midleton and they will have to show more scoring power if they are to cause a shock.

There are five ties spread across three rounds down for decision in the Junior Plate.

In round three Young Muster make the short journey to Newport to take on the Tipperary side and the winners will be at home to Skibbereen the following Sunday.

The tie of the round sees surprise packets Killarney, following their single point victory over Shannon last time out make the long journey to the Premier County to take on Thurles.

Muskerry will have their work cut out as they entertain Division 3 promotion contenders Galbally at Ellis Park.

The first quarter final sees Old Christians take on Douglas in the Cork derby at Rathcooney. Both sides are on a good run at the moment and the experience of the home side should see Old Christians advance.

Two sides with contrasting fortunes go head to head in the Second Division of the Munster Junior League as St. Senan’s entertain Youghal at Jimmy Slattery Park. The Clare side will be aiming for maximum points in their bid for promotion with Ballincollig and they also need results from their remaining two games at home to Charleville and away to Muskerry. The East Cork side, who have won their last two League games, will also be seeking a victory that would move them up the table in their bid to avoid a second successive relegation.

The only game in Division 3 sees third-placed Presentation and second-placed St. Mary’s go head to head in the Limerick City derby at Rathuard and a win will be a boost for either side in their bid to make the semi finals.