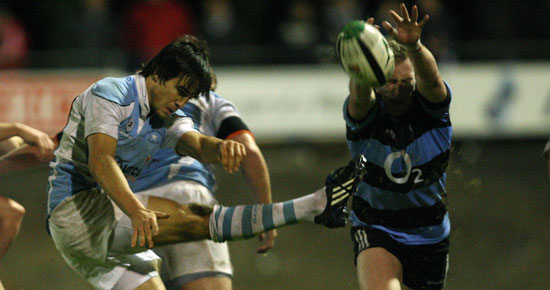 It is a busy weekend of league action as several of the leagues start coming to a conclusion.

In Division 1A of the AIB All Ireland League, leaders Shannon should maintain their top spot with a win over Blackrock College at Thomond Park. The Dublin side have fallen away from a challenging position in recent weeks and another defeat could end their chances of a semi final play off spot.

Cork Constitution who are three points behind Shannon in second place, travel to Clontarf and the Castle Avenue outfit are involved in the relegation battle and could make things difficult for the Cork side.

Dolphin and Garryowen meet for the fourth time this season at Musgrave Park in a game that is crucial to both. The sides met a few weeks ago in Dooradoyle with Garryowen recording a one point win and were also winners when the sides clashed in the AIB All Ireland Cup just before Christmas. This tie should again be very close with the home side expecting to shade it this time.

In Division Two Bruff are amongst five sides battling it out for the second promotion spot. They welcome Corinthians to Kilballyowen Park and will be confident of recording another victory.

All the other Munster sides in this Division are battling against relegation. Clonakilty who have moved out of a relegation place with wins over Thomond and Highfield can move further up the table with another home win over Old Crescent. A defeat for the visitors would see them with a major battle on their hands to avoid the drop.

Thomond who have slipped alarmingly down the table in recent weeks face a tough encounter with a home tie against promotion chasing Belfast Harlequins.

Highfield who occupy second last spot have two home games coming up. They start with a visit by Trinity and know that they must win these ties if they are not to be playing Third Division rugby next season.

Third Division leaders Midleton should bounce back from last week’s disappointing draw with Rainey Old Boys with a home win over Connemara and make it eleven wins out of twelve.

Nenagh Ormond battling for a top four finish should hold on to their fourth position with a home win over Suttonians, especially after the Dublin side suffered a heavy defeat last week away to Queens.

Sunday’s Well are challenging for a top four finish should any of the sides above them slip up and should pick up the points when they visit bottom side Co. Carlow.

Sunday is also a crucial day in the Munster Junior League as the second last series of games are down for decision but because of some outstanding games yet to be played not all promotion and relegation issues are clear.

Three sides are battling it out for the Division One title and all have two games to go. Richmond, who are level on points at the top with Tralee but lead on the head to head meeting between the sides, should pick up the points at home to bottom side St. Senan’s.

The other two main challengers Tralee and defending champions Cashel meet at O’Dowd Park with both sides needing a win to stay in touch and a defeat for either side will almost certainly end their title ambitions.

At the other end of the table Crosshaven making a great bid to avoid relegation have Waterpark as visitors and must win this tie and hope that one or more of the sides just above them lose.

Thurles who are a point ahead of Crosshaven with a game in hand have a home tie against Skibbereen. The West Cork side are not the best of travelers and depending on which side turns up Thurles could collect the points.

Kilfeacle two points ahead of Crosshaven but with two games in hand travel to Cobh Pirates. After last week’s disappointing effort in the Cup Kilfeacle will have to hit top form if they are not to find themselves in a relegation battle. Cobh who moved up to joint fourth place after their win over Clonmel will be confident of another home victory.

In the other game in this Division, Clonmel entertain Ballincollig and the Tipperary side who are getting back to being able to field a full strength side after numerous injuries should get the better of their visitors in a mid table clash.

Three sides are battling it out for the two promotion places from the Second Division. Leaders Clanwilliam travel to Bandon confident that they can pick up the points and with their final game at home to promotion chasing Old Christians anything can happen.

Galbally looking for promotion to the top flight travel to Muskerry, a side they will face again next week in the Cup. The County Limerick should win but Muskerry boosted by that great win over Garryowen last week will be no push over.

Old Christians in third place three points behind the leaders and with a game in hand have a home tie against Newcastle West. The Rathcooney side have gone off the boil in recent weeks and can not afford to drop any more points if they are to get back to the top flight.

There is also a big game at the foot of the table when bottom side Youghal travel to Ennis. It is a must win game for Youghal but the home side will be expected to come out on top.

St. Mary’s could get their second win of the campaign with a home win over Kinsale, while Kanturk will fancy their chances of picking up the points away to Newport.

The top two sides in section A of the Third Division Castleisland and Killarney meet at Castleisland. The runaway leaders will be expected to continue their unbeaten run in the league with a win.

Presentation in third place can make up ground on Killarney should they lose, when they play Kilrush.

Corca Dhuibhne can keep their outside hopes of a semi final place alive with a home win over Scariff and Killorglin will hope to continue their recent good run with a home victory against Abbeyfeale.

In Section B the top two sides play the bottom two sides and will be looking for bonus point wins. Mallow travel to Shandon and Charleville host Dungarvan.

Fermoy have home advantage against Carrick-on-Suir and neither side can afford to drop further points if they hope to make the play offs.

Like wise Waterford City must win away to Douglas to stay in the promotion race.

The Northern and Southern sections of the Munster Seconds Leagues are drawing to a close as both the Gleeson League and Junior Two Leagues approach the knock out stages.