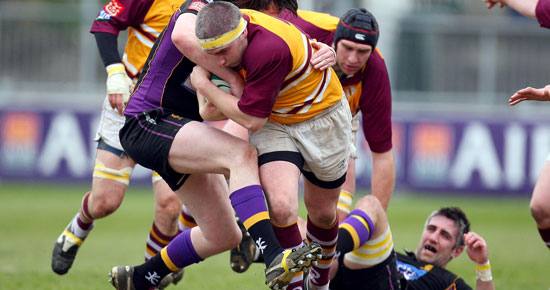 At Castle Avenue Cork Constitution are back on top after holding out a late Clontarf rally which yielded ten points for a 20-18 victory. It was 8-8 at half time with Richard Lane, Cronan Healy and Duncan Williams scored tries and Lane kicked a conversion and penalty.

Leaders Shannon received a major set back at Coonagh when Blackrock College defeated them 25-3 with Mossie Lawlor kicking a second half penalty for the home side.

Garryowen eased their relegation worries with a 21-9 away win over Dolphin at Musgrave Park. A try by Alan Gaughan and a conversion and two penalties by Conor Murray had the visitors 13-0 ahead at half time. Murray added a penalty and three penalties by Barry Keeshan had the home side trailing by seven points with ten minutes remaining. An intercept by Barry O’Mahony inside the Dolphin Twenty Two saw wing forward race the length of the pitch only to knock on when he went to ground the ball.
Gaughan made sure Dolphin had no bonus point from this tie when he scored his second try five minutes into injury time.

U.L. Bohemian look destined for Division 1B next season after they lost to St. Mary’s College at Templeville Road 39-12. The visitors trailed 24-7 at half time and had tries from Sean Henry and Cian Aherne and a conversion by Danny Riordan.

Young Munster remain on course for promotion from Division 1B after their 27-13 away win over Ballymena. The Cookies led 11-10 at half time and Alan Kingsley was again the star of the show with a try and four penalties. Ger Slattery and James O’Neill also scored tries for the Limerick side.

U.C.C. picked up maximum points with a 32-10 win over Ballynahinch at the Mardyke. The students led 20-3 at half time and had tries from Brian Derham, Sean O’Sullivan and Phillip Donnellan, Sean Scanlon and Brian Slater. Derham kicked a penalty and conversion and Andrew Burke also added a conversion.

Bruff maintained their challenge for a promotion spot from Division Two with a 27-0 home win over Corinthians. Stephen Foster, Cathal O’Regan and John Shine all scored tries and Brian Cahill kicked two conversions and a penalty and Phillip Moloney added a penalty and a conversion.

All the other three Munster sides in this Division are battling relegation with Clonakilty and Thomond doing their prospects a load of good with impressive victories.

Thomond eased their fears with 23-12 victory over Belfast Harlequins at Fitzgerald Park. Declan Cusack scored a try, three penalties and two conversions for the winners and Eddie Fraher also scored a try.

Clonakilty’s 34-13 home win over Old Crescent leaves the Limerick side in serious trouble after the West Cork sie recorded their third successive victory over Munster opposition. The home side led 15-3 at half time with tries from John O’Donnell and Kurt Morath and a conversion and penalty from Morath. Mark Woods kicked a penalty for the visitors. O’Donnell, Michael O’Hea and Noel O’Sullivan scored further tries for Clonakilty and Morath kicked two conversions. Lemeki Viapula scored a try for Old Crescent and Woods converted and also added a penalty.

Highfield still remain second last after they lost at home to Dublin University 8-5. The Dublin students led 8-0 at half time and Joey Sheahan replied with a try for the home side after the break.

Midleton collected maximum points from their home tie with Connemara to remain top of the Third Division after their 26-12 victory at the Towns Park. Tries by Michael O’Connell and Troy Smith both converted Jeff Hitchmough had the home side 14-5

ahead at half time. Troy Smith and Damian Smyth added tries after the break and Hitchmough converted both.
Nenagh Ormond still remain in fourth position after their 19-7 home win over Suttonians.

Sunday’s Well are still chasing a top four finish with a 42-28 away win over bottom side Co. Carlow. Skipper dave Twohig scored two of his side’s six tries, Tom parker also got two and John Moynihan and Chris Long one each, Eamon Ronan kicked a penalty and two conversions and Danny O’Shea added a penalty and a conversion.