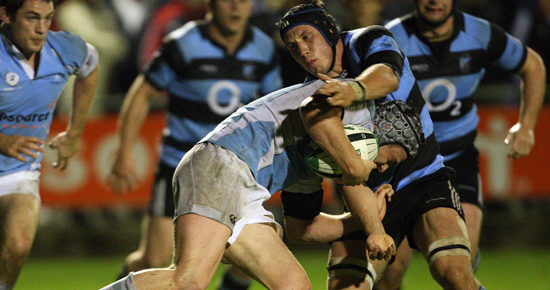 It is the final round of games in the AIB All Ireland League and the Munster Junior Cup semi finals that dominate this weekend fixtures list.

All promotion and relegation issues in the AIB All Ireland League have already been resolved with the only outstanding issue to be decided is the composition of next week’s play offs in all three Divisions.

It is disappointing that the IRFU have turned down requests to stagger the times of these games especially in Munster to avoid a clash with the Heineken Cup tie at Thomond Park, especially as several of these games are not going to have a bearing on the play offs.

There are two big Munster local derbies in Division 1A and the attendances at these games are likely to be down.

Cork Constitution are already assured of a home semi final tie next weekend and they complete their program with a home tie against Dolphin. The Musgrave Park outfit must win this tie to make sure of their place in the play offs. However a lot will depend on how many of their Munster players will be available to them.

Defending champions Shannon must win their final tie against Garryowen at Coonagh and hope Dolphin slip up to guarantee them a semi final place.

U.L. Bohemian already relegated, travel to Blackrock College in a game that is not going to affect any of the major issues but the Limerick side would like to finish with a win despite being relegated.

In Division 1B leaders Old Belvedere travel to the Mardyke and must win to be assured of their place in next weekend’s semi finals. U.C.C. with nothing to play for are unlikely to be at full strength because of the All Ireland Under 21 Cup Final, so the Dublin side should book their final place against the side that finishes second in Division 1A.

Young Munster are still in with a chance of making the play offs but they must defeat Buccaneers at Dubarry Park and hope that the students might do them a favour at the Mardyke. The Athlone based side are not clear of relegation and could make things difficult for the Limerick side.

In Division Two Bruff who have already won promotion after last week’s win over Malone travel to Clonakilty and this game will kick off at 1.45. Clonakilty who already avoided relegation with a great run will want to put in a better performance after a heavy defeat in their last game at home to Terenure College.

Highfield and Old Crescent meet at Woodleigh Park in what looked like a decider to see who would be joining Greystones in the Third Division next season, but Crescent’s surprise 14-12 home win last week over Lansdowne ensured they will be playing in the Second Division next season and Highfield would be relegated. With a small crowd now expected to attend this game it will be difficult for both sides to be motivated.

Thomond complete their campaign with a home tie against Terenure College and with little to play for the home side could sign off with a victory.

In Division Three both Midleton and Nenagh Ormond are assured of their place in the play offs and both sides travel to Dublin with Midleton playing Suttonians and Nenagh away to Wanderers.

Sunday’s Well still have an outside chance of finishing fourth. They must beat Instonians at Musgrave Park and hope that Banbridge lose at home to Navan.

Richmond are away to Seapoint in the All Ireland Provincial League Championship and after losing to Monivea in their opening game they must win this tie to keep their hopes alive of playing in the AIL next season.

U.C.C. and Lansdowne meet in Clonmel in the final of the Frazer McMullen Cup and the students will be bidding to regain the trophy.

The big game in the Munster Junior Cup semi finals is the meeting of holders U.L. Bohemian and Cashel at Clifford Park. U.L. suffered their first defeat of the season last week when Richmond defeated them 20-18 in the final of the Transfield Cup. Cashel who failed in their bid for three successive Junior League titles will be going all out to win their first title. It should be an interesting tie with little expected between them at the finish.

The other semi final tie sees Young Munster playing Bruff at Annacotty. Young Munster caused the upset of the competition by knocking out Cork Constitution in a previous round, while Bruff have been improving with every outing.

The two remaining quarter final ties in the Munster Junior Plate will be decided with Garryowen expected to get the better of Waterpark at Dooradoyle and Kilfeacle should follow up their success in the Junior Clubs Challenge Cup with an away win over Dolphin.

The Third Division semi finals in the Munster Junior League are also down for decision with both winners guaranteed promotion to the Second Division next season.

Castleisland are at home to Mallow and after the disappointment of losing out at the semi final stage last season, the Kerry side are unlikely to slip up this time.

Charleville are at home to Killarney and the North Cork side will be expected to win this tie.

Cork Constitution are at home to Thomond in the semi final of the Munster Seconds League and the Temple Hill side should advance to the decider.

In the O’Neill Cup Douglas and Midleton meet at Moneygourney in the semi final, while Bandon host Kanturk to decide who will face Crosshaven in the other semi final.

Clanwilliam play Carrick-on-Suir in the semi final of the Manseragh Cup and Cashel await the winners in the final.

In North Munster the Webb Cup and O’Carroll Plate continue, while in South Munster both semi finals in the Junior Two and Three Cups are down for decision.