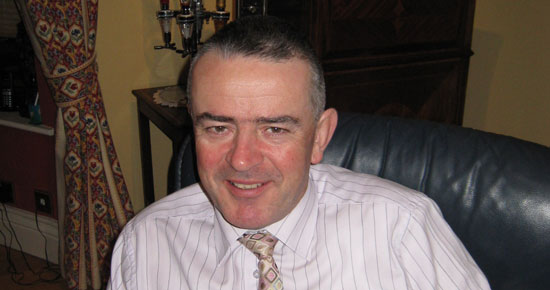 Our latest Volunteer Recognition Award for the 2009-10 season goes to Liam McGuire of Killarney RFC.

Growing up in Cork, Liam attended Coláiste an Spioraid Naoimh and developed an early affinity for the game while playing his underage rugby at Highfield RFC.

Upon joining AIB Bank, Liam was posted to Killarney where he met his wife Bridget. In 1983 Liam was a key figure in the revival of Killarney RFC and has been ever-present on the Club committee since that time. He also played for Killarney for many years and was rewarded by being selected to play on the Munster Junior Team in 1984. Liam has also coached at all grades in the Club from U10s through to U16s and has been involved in the Club’s participation in the Community Games.

However it is off the field that Liam’s influence has been to the fore in the continuing development of the Club. He first official role was Treasurer and since then he has held every position in the Club (bar President apparently due to the fact he is still too young!) and is now Chairman in what is a vital year for Killarney RFC. It is through Liam’s drive that the Club is now in a position to purchase land to have their own grounds, with an investment of One Million Euro.

As Chairman of the Fundraising Committee, Liam has spent innumerable hours driving the Club’s Development Plan, sourcing and viewing land options, putting plans together, organising events and meeting with the many stakeholders and parties involved. Thanks to his commitment the Club now stands on the threshold of their most important step to date.

A new home for Killarney RFC couldn’t come at a better time as the Club currently has more players on its books than ever, with over 250 players wearing the Killarney colours on a weekly basis. At present the 1st XV is still on target to secure a semi-final place and possible promotion at the end of the season, while the Club has featured in a number of Age Grade Finals already. There are also four players involved in the Munster U17 Development Squad so the future of the Club would seem to be in good hands.

Club President Junior Finnegan has described Liam’s input as invaluable in steering the Club to the position where they will now be able to provide an ongoing legacy for future players and members of Killarney RFC. Munster Rugby is delighted to congratulate Liam as a most deserving winner of our Right Price Tiles Volunteer Recognition Award.

Successful nominees who meet the set criteria will be recognised for their efforts by receiving a generous prize package which includes Munster match tickets, our Volunteer Award Trophy and a voucher for the Munster Rugby store.
For full details of eligibility and terms and conditions, please refer to www.munsterrugby.ie or email damonurlich@munsterrugby.ie