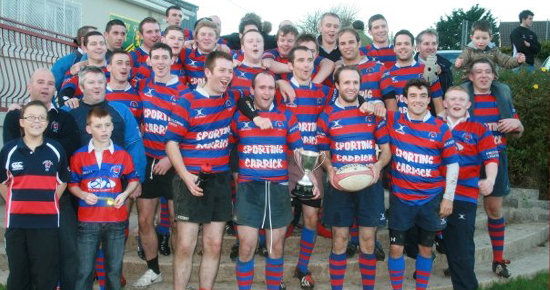 It was a great day for Carrick-on-Suir as after several baron years without a major trophy, they won the Martin O’Sullivan Cup with a 16-6 victory over Mallow in the final at Fermoy.

This competition which is for the sides playing in the Third Division of the Munster Junior League was a deserving victory for the Tipperary club. Brian Dignam and James Wallace scored tries for Carrick-on-Suir and Wallace kicked two penalties. Mallow replied with a penalty and drop goal from Brian Morris.

In the other Cup tie of the weekend Kanturk booked their place in the final of the Junior Clubs Challenge Shield Final with a 25-5 home win over Youghal. Alan Fox opened the scoring with a try for Youghal but Simon Mulholland had Kanturk level by half time with a try. A second try by Mulholland and one each from Conor O’Sullivan, Luke McCabe and Malcolm O’Leary made sure of Kanturk’s place in the decider.

In Division One of the Munster Junior League only three sides remain unbeaten after two series of games. Richmond and Waterpark share the lead after both sides recorded maximum points away from home.

In the game of the day at Tralee, Richmond snatched a dramatic victory with an injury time try by Thomas O’Brien for a 24-23 victory.
The Limerick side got off to a great start with a try from Pat Humphreys which Brian Begley converted. Gareth Walsh kicked two penalties for Tralee before Finbarr Hogan got in for a second try for Richmond. Walsh levelled the scores with two further penalties and a Walsh try had Tralee 17-12 ahead at half time.
A fifth penalty by Walsh extended the home side’s advantage before Mike O’Friel scored a try for the visitors and Begley converted to leave a point between the sides.
Walsh brought his tally to twenty three points with another penalty and with the last play of the game O’Brien struck with his side’s fourth try.

Waterpark travelled to Kilfeacle and came away with the points on a 27-20 score line. Robbie Marsh, Hein Havenga, Colm Phelan and Shane Kavanagh scored tries for the visitors and Brendan Walsh kicked two conversions and a penalty. Pierce Breen replied with two tries for the home side and Matt Earl also got a try. Shane Luby kicked a conversion and penalty.

Cobh Pirates followed up last week’s draw at Crosshaven with a 14-10 home win over Thurles. The Tipperary side led 10-6 at half time with a try by Owen Dwyer and a conversion and penalty by Aidan Dwyer. Brendan Ronan replied with two penalties for the home side. A try by Tom Keaveny and another Ronan penalty made sure of victory for the Pirates.

Defending champions Cashel got their challenge back on track with a 32-13 home victory over Skibbereen. Despite playing into the wind in the opening half the Tipperary side led 12-6 at half time with two tries from Maximilliano Nannini and a Pat O’Connor conversion. Mark Kingston kicked two penalties for the visitors and converted a penalty try early in the second half. Pat O’Connor kicked two penalties and converted tries by Colin Morrissey and Michael Kelly to make sure of the points for Cashel.

In Section B First half tries by Joe Larkin and Dan Lucey both converted by Andy Larkin earned Douglas a 14-8 home win over Dungarvan. Jim Curran kicked a second half penalty for the visitors and Paddy Dunphy got in for a try.

Under 19 Development League:Highfield B 8,Muskerry 21;

News from around the Clubs – 25th October