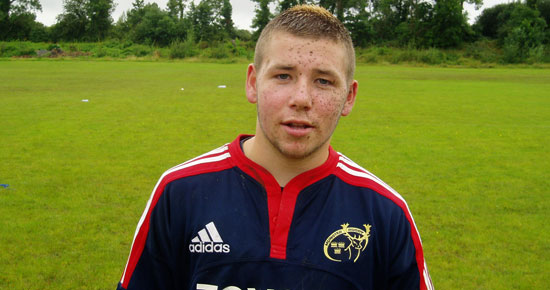 The young guns of Munster are flying the flag at U18 Schools and Club level as they line out for their respective National teams in the Five Nations schools festival in Italy, and the FIRA/AER U18 European Championships in France.

The Irish U18 Schools side travelled to Parma, Italy to take part in the Five Nations Schools festival this week where they take on Wales, Italy and England. This annual festival was hosted by Ireland last year and took place in Cork with the six nations competing. France withdrew from competition this year.

The side recorded their first win in the opening game against Wales, winning 22-15. Rockwell’s Shane Buckley, PBC’s David O’Mahony and Niall Scannell, and Crescent’s Gareth Quinn McDonagh all played their part in the match-day 22, and Quinn McDonagh found himself on the scoresheet with a well taken dropgoal in the opening half.

They made it two wins out of two after defeating the home nation Italy 29-3 on Wednesday evening. Munster players involved in the starting XV included Crescent’s Ben Sargent, PBC’s Niall Scannell capt. and David O’Mahony, and Rockwell’s Shane Buckley.

The Irish will go on to play an impressive England side on Saturday afternoon in Colorno, which will no doubt be their toughest encounter after England defeated Scotland 75 – 0 earlier in the week. The five Munster Schools’ Players have been named in the match 22, with Crescent’s Gareth Quinn McDonagh back in the number 10 shirt and PBC’s David O’Mahony named in the starting XV.

The Irish U18 Clubs side was in competition in the FIRA/AER U18 European Championships on the Cote D’Azure in the south of France last week. The Irish side was seeded second in light of last year’s final placing and thirty two European Nations competed, divided into four divisions.

Ireland played Russia, England and Romania and finished third overall in the tournament.

Munster’s sole representation was prop Jake Considine from Young Munster who was named in the match 22 for all three games and started against Romania.