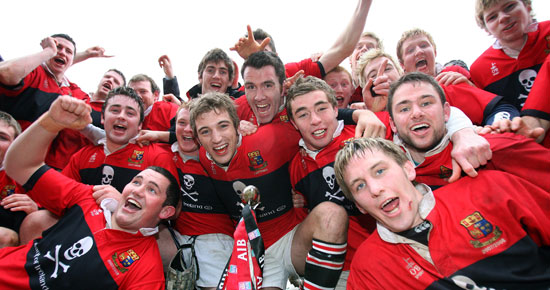 UCC Rugby Football Club celebrates what may be the most successful season in the 137 year history of the club.

UCC Senior Team were crowned All Ireland League Winners (Division Two) and are promoted to Division One for the first time in the clubs history since the AIL was established. Over the past 7 seasons the senior team have consistently finished in the top four of AIL Division 2 finally making the breakthrough this year. Indeed UCC have been knocking on the door of Division 1 since 2001 following the success of the UCC Rugby Academy; which started to bare fruit almost immediately after the Academy was set up in 2000. This years senior squad had won the 2006/2007 All Ireland U20 title and last year won the AIL Division 2 playoff title. Promotion for this group of ambitious players is their third national title in three years.

The top four teams in the club (Senior, J1, J2, U20) all won their major league competitions. These four teams lost a total of three matches between them in the regular league campaigns. U20s were undefeated in the South Western Conference League, while the Seniors, J1 and J2 lost one league game each in their respective season long leagues.

Three other major national and provincial titles narrowly slipped past the club this season when the U20s lost out in the All Ireland quarter final, the J1s lost out in the Munster Junior Cup semi-final and the Seniors in the AIL playoff final which they had hoped to retain having won it last season – each team missing out on victory by a single score. In addition the seniors narrowly missed out on an All Ireland Cup semi-final spot again by a single score.

A total of ten competitions and trophies were won by five of the six teams in the club making it 10 out of a possible 18 titles the club compete for across the teams.

A Ten Competition Winning, Ten Trophy Season
Senior Team
AIB All-Ireland League Winners (Division Two) winning Promotion to Division One. The seniors finished with 59 points, the highest points tally of all three AIL divisions and were defeated only once in the regular league season over 15 AIL games.

During the previous 2007-8 season UCC RFC enjoyed great success winning nine competitions and ten trophies, including the UCC Club of the Year trophy. This season, however, the Senior, J1 and J2 teams achieved more than last season. The Senior Team won promotion, which just eluded the club last year. The Junior 1 team won the Munster Seconds League (Division 2 last season) whereas victory in Division 1 was achieved this season. The Junior 2 team won the South Munster Plate Cup last season, whereas the club won the full South Munster Cup this season to complete the much coveted J2 triple of League, Cup and provincial Munster League-Cup uniquely achieved this year.

Congratulations to all players, coaches, managers, officers and everyone involved in this special season for UCC RFC.