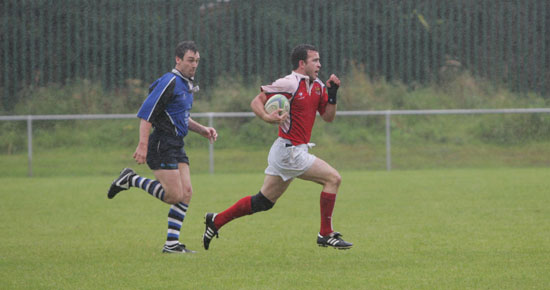 It was busy season at Junior 1 level with two extra competitions, namely the Junior Clubs’ Challenge Shield and the Junior Bowl being contested for the first time this season.

As a result of Waterpark being relegated to the Munster Junior League, three sides were relegated from Division 1 and 2.

In the top tier of the Junior League Cashel retained their League crown and for the second successive year, missed out on the chance of becoming the second Club from the Premier County to play in the A.I.L. with Nenagh Ormond. They were denied the opportunity of joining their Tipperary neighbours at the highest level when they were defeated by Sunday’s Well in a relegation play-off, which secured the Cork side’s senior status.

The League was not the only piece of silverware won by the Tipperary side as they also won the Junior Clubs’ Challenge Cup when they defeated holders Crosshaven 16-7 in the decider at Charleville in March.

Cashel were also Munster’s sole representatives in the semi finals of the A.I.B. sponsored All Ireland Junior Cup, where they lost to eventual winners Tullamore.

Elsewhere in the top tier of the Junior League, Tralee enjoyed an excellent season as they finished runners-up to Cashel and reached the semi finals of the Junior Cup and this spells a bright future for this progressive Club and Kerry rugby in general.
Old Christians, Bandon and Newport will be playing in the second tier next season.

The winners of the two inaugural competitions plied their trade in Division 2 and both had contrasting League campaigns.
Ballincollig were promoted to the top tier for the first time in their history and finished in second place behind champions St. Senan’s.
Ballincollig and ‘Senan’s also contested the Junior Bowl final which the Mid Cork side won on a 39-0 scoreline at Kilballyowen Park in Bruff.
At the foot of the table, Charleville, Mallow and Abbeyfeale were consigned to the third tier for next season, but Charleville finished the season with silverware as they recorded a narrow 9-7 win over St. Mary’s in a low-scoring Junior Clubs’ Challenge Shield decider in Abbeyfeale.

Galbally took the honours in Division 3 as they recorded a comprehensive 43-3 victory over St. Mary’s in the divisional final at Kilfeacle and this is also the South Limerick side’s first promotion in the history of the Junior League. St. Mary’s are also promoted and this is the first step on the road to restoring the Corbally Club to former glories.

Elsewhere in the third tier Killarney caused a major upset as they knocked Shannon out of the Junior Plate with a 13-12 home win over the Limerick side in early March and they also enjoyed good innings late on in the League.

It was a case of so near and yet so far for Carrick-on-Suir as they missed out on promotion for the second successive year when they were defeated by St. Mary’s in the Division 3 semi final.

The Martin O’Sullivan Cup was the final opportunity for Killarney and Carrick to finish the season with some silverware, but neither side reached the final of this competition.
Killarney began their campaign with a 22-6 away win over holders Kilrush and got a walkover from Douglas in the quarter finals. Their run ground to a halt when they were surprisingly defeated 22-6 by Waterford City in the semi finals at Kilbarry. City accounted for Fermoy and St. Mary’s in the earlier rounds and they also endured an indifferent League campaign which yielded three victories.

Carrick recorded home victories over Dungarvan and Scariff before losing 25-3 to Castleisland in the semi final at the Kerry venue.

The Kerry side came from behind to take the title when they defeated City 10-8 in the decider at The Showgrounds in Fermoy. This victory will be a welcome boost for ‘Island as they strive to compete with near neighbours Tralee.

U.L. Bohemian won the Munster Junior Cup for only the second time in their eighty-seven year history when they defeated Garryowen 19-16 in the final at Rosbrien on Easter Monday. This was U.L. Boh’s first Junior Cup success since their tenth anniversary year in 1932 when they played under the name Bohemian R.F.C. This final also decided the Tramway Cup winners.

Thurles claimed the Junior Plate for the third time in their history when they recorded a narrow 13-11 victory over Skibbereen in the decider at Musgrave Park.

Trophies on Display in Musgrave Park