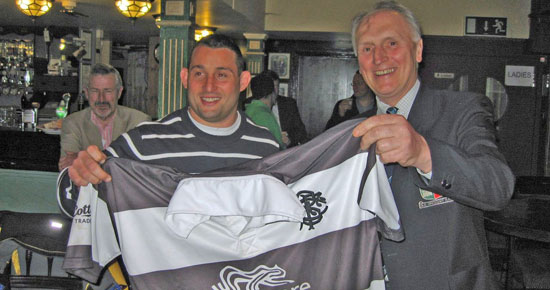 Old Crescent RFC hosted a reception in the clubhouse last Monday to mark the departure of Freddie Pucciariello from Old Crescent and from Munster.

During his time in Limerick, Freddie was an invaluable member of the Old Crescent first team management and he played some critical games for the Club when his Munster commitments allowed.

His experience and motivational skills were never more in evidence when he took charge of our senior team in their spirited display against Cork Constitution in the Munster Senior Cup Final earlier this year, and he contributed hugely to our top four finish in the AIL this season.

Pictured at the reception is Freddie Pucciariello receiving a gift from Niall Sheehy, Senior Vice President, Old Crescent RFC. Freddie presented Old Crescent with the jersey he wore when he played for the Barbarians in their defeat of South Africa in December 2007, which will be proudly displayed in the clubhouse.

As part of a nationwide tour of Irish rugby trophies won this season, the RBS 6 Nations Trophy, the Triple Crown Trophy and the Magners League Trophy, will be on display in the Old Crescent RFC Clubhouse from 5.00pm to 7.00pm on Wednesday, 27th May. All are welcome, bring your cameras.