Success For Canadian Touring Side 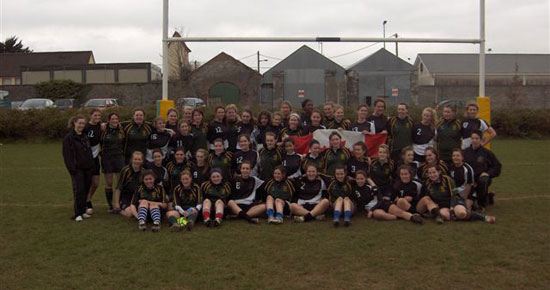 On March 21st, a combined team of U-18 girls from Fermoy and Crosshaven took on Ashbury College, a touring team from Ottawa Canada, following three training sessions together.

Ashbury were first to kick off and put good pressure on Ferhaven from the start keeping them within their 22 for some time. Ferhaven’s defence remained quite good and once they settled into the game managed to get themselves clear and back up field.

With the wind in their favour Ashbury started to kick the ball gaining ground and by the 15th minute had got their first hard earned try. The conversion was not successful. Following the restart Ferhaven seemed to go up a gear and kept themselves well within the Ashbury 10 metre line. Some excellent mauling soon brought them within only a few metres from the try line but a turnover ball was cleared down field and the pressure was off Ashbury once again.

With the last remaining minutes of the first half the Ashbury girls following a maul brought a quick ball out along their back line and with great running got their second try under the posts. The conversion this time was successful.

Ferhaven made a number of changes for the second half bringing on fresh players and changing others to positions more suited to them.

It was now Ferhaven’s turn to get the second half under way and within only a few minutes it was obvious Ashbury were under pressure as Ferhaven forced them back behind their 22, and with excellent rucking and mauling the Ferhaven forwards drove over the line for a well earned try. The conversion was also successful. For most of the remainder of the game both sides played great rugby and seemed to be very balanced. Ferhaven’s backs put up great defence at times with outstanding tackles to keep Ashbury from the line.

Ashbury were rewarded again following a long kick up field in behind the Ferhaven back line. Both teams chased hard but as the ball crossed the try line Ashbury were first with the downward pressure. The conversion was not successful. The Ferhaven girls were not done yet and came back yet again with only 5 minutes remaining won themselves a scrum just 5 meters from the line, with a quick pass by the no.8 to the scrum half she was robbed of a certain try as the ball was knocked forward just before touching it down.

Post match refreshments in the clubhouse included the exchanging of signed flags and rugby balls and the presentation of Crosshaven and Fermoy plaque’s to the team captain. A big thank you must also go to Michael Lynch who sponsored a beautiful metal map of Ireland which was presented to Jennifer Boyd, Ashbury College coach along with metal key rings they were engraved with the team names and date of the match and were given to all players, as keepsakes to mark this historic occasion. Thank you must also go to all the coaches & parents who did so much in helping make it a special day for all the girls.