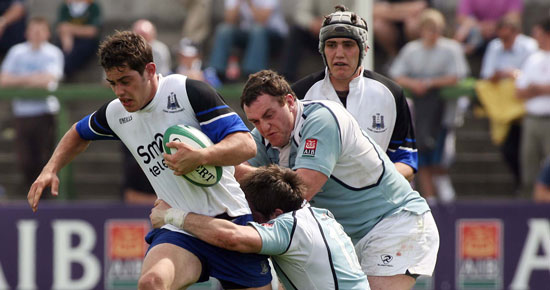 The top game of the weekend is the A.I.B. sponsored All Ireland Cup final between Cork Constitution and Ballynahinch at Dubarry Park in Athlone on Sunday.

The Cork side, who were the inaugural winners in 2006, will be aiming to continue Munster Clubs’ dominance as this competition was won by Shannon and Garryowen in the past two years.

Con’ will have their work cut out as the County Down side, who are also challenging for promotion to Division 1 of the A.I.L. for the first time, have already accounted for three top flight Clubs en route to this decider and two of these ties were away from home.

The All Ireland Junior Cup Final is a repeat last season’s decider when holder’s Navan take on Tullamore.

In Division 1 of the A.I.L. Young Munster welcome St. Mary’s College to Tom Clifford Park and maximum points are vital for the home side if they are to avoid relegation, while a victory is also essential for ‘Mary’s in their bid for a top four finish.

Six sides continue to wind down their seasons in the top two divisions of the Munster Junior League. In Division 1 Crosshaven entertain Tralee at the South Cork venue on Saturday, while on Sunday Old Christians welcome second placed Kilfeacle to Rathcooney.

The first of the Division 3 semi finals sees Castleisland taking on Galbally at the Kerry venue on Sunday and this game also doubles up as a Junior Plate quarter final tie. The prize for the winners is a place in the Second Division next season.

This will be the biggest day in Galbally’s thirty-seven year history (founded in 1972) as they seek their first ever promotion in the Junior League, while ‘Island will be aiming to return to their former glories of top flight rugby in the next few seasons in a bid to compete with near neighbours Tralee, who are currently in third place in the First Division.

Next Wednesday, Division 3 promotion chasing Killarney travel to Castleisland in their bid to keep alive their faint hopes of clinching a semi final place. Besides beating their near neighbours Killarney must also hope that the other Kerry side in this section Killorglin can put one over on St. Mary’s in their final game.

St. Mary’s and Thurles go head to head in the quarter final of the Junior Plate on Sunday and the winners will have a home tie against either Castleisland or Galbally in the semi finals. Experience could favour the Tipperary visitors.

The semi finals of the inaugural Junior Bowl are down for decision as Charleville, who won the first Junior Clubs’ Challenge Shield final last week, bid for a second piece of silverware as they entertain promoted Ballincollig at Smith’s Road.

Division 2 champions St. Senan’s, who surrendered their Junior Plate title when they were comprehensively defeated 42-5 by Galbally in a replay at the South Limerick venue, take on Banner County neighbours Scariff at Jimmy Slattery Park and should make it to the decider.

In the Munster Senior Seconds’ League, top flight status is at stake as Bruff and Highfield go head to head in a play-off at Kilballyowen Park, with the losers being relegated to Division 2.

The last place in the semi finals of the Munster Junior 2 League Cup is up for grabs when holder’s U.C.C. entertain Shannon at Curaheen Road on Sunday.

The semi finals of the South Munster Junior League are also down for decision as U.C.C. will be aiming to recover form their recent Junior Cup semi final defeat against Garryowen as they take on Dolphin at Curaheen Road, while Cork Constitution and Highfield go head to head in the second semi final at Temple Hill next Thursday evening.

The Gleeson League final sees holders Garryowen take on Cashel in Bruff and a victory for the Tipperary Club’s second strength side will show their strength in depth as their first team bid for All Ireland league status, while this will also be a test of character for the Limerick side’s third team.

Killarney, who have been on a good run in the latter part of the season, get their Martin O’Sullivan Cup campaign underway when they welcome Kilrush to the Kingdom. The Kerry side will be dark horses in this competition and this will also see this as their last opportunity of completing the season with silverware.

The Mansergh Cup is also down for decision as back-to back Munster League champions Cashel and holders Clonmel go head to head in Sunday evening’s final at Clanwilliam Park.

The McCarthy Cup final sees Ballincollig taking on Bandon at Musgrave Park and Mallow and Listowel go head to head in a Junior 4 League play-off at St. Joseph’s Road.