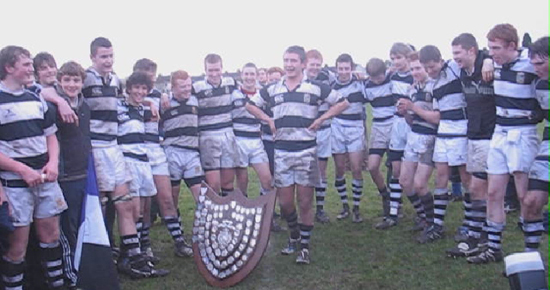 Three School Cup competitions were decided despite the inclement weather.

With Rathcooney and Cois Laoi being declared unplayable both schools tossed for the venue.

Playing with the advantage of the strong wind in the opening half Pres’ Center Steve Dinan kicked his side into the lead with a penalty after two minutes.

Indiscipline was to cost the Sydney Hill College dearly as Rory Scannell doubled the lead with a long range penalty after fourteen minutes and minutes later Dinan was on target again with his second effort.

A great back line move involving Mark O’Mahony, Dinan and Brian Crowley saw the Pres winger being stopped just short of the line.

Eventually the Christians pack began to win quality ball and their back line was posing numerous problems for the Pres’ defence.

Darragh McNamara was off target with a Christians penalty but a sweeping back line move two minutes before half time saw winger Tom Moreland touch down in the corner.

A minute into the second half Christians had the lead reduced to a single point when McNamara was successful with a penalty kick.

However Pres’ withstood the Christians onslaught that followed and when they did work the ball into the Christians half Dinan kicked his third penalty after forty four minutes.

Christians response was swift and McNamara converted a long range penalty to leave the score 12-11.

Five minutes from time Dinan made it 15-11 with his fourth successful kick but try as they might the Pres’ defence held firm until the final whistle.

Pres’ were denied the double when Crescent Comprehensive had a deserving 20-5 win over the Cork College in the final of the McCarthy Cup at Dooradoyle.
The Limerick side let 17-0 at half time with two tries from Cormac Blake and a try and conversion by Greg O’Shea.
Dylan Lane replied with a try for Pres’ after the break and Gary Fitzgerald completed the scoring with a penalty for the winners.

Waterpark College caused an upset in the O’Brien Cup final at Clonmel, when they defeated Villiers 3-0. A second half penalty by Tom Casey decided this contest. This win will now see Waterpark face Midleton College in the opening round of the Avonmore Milk Schools Senior Cup.

This competition got under way in Newtown School, when Bandon Grammar defeated the home side 23-6.
Ben Cross kicked two first half penalties for the Waterford school but a try just before half time by James Bendon and a conversion and penalty by Darren Sweetman had the West Cork school 10-6 ahead at half time.
Henry Travers and Conor Moloney added further tries after the break and Sweetman kicked another penalty to book a second round place against either Midleton College or Waterpark College.