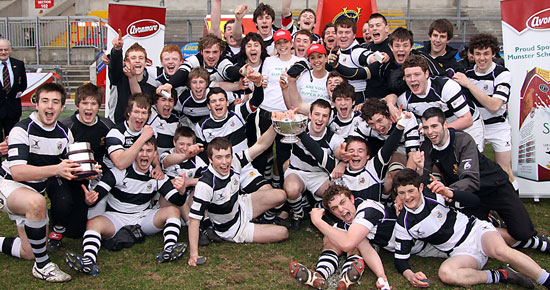 Pres’ got off to a great start when center Daniel Horgan got in for a try after three minutes and Sean Og Murphy converted.

J.J. Hanrahan brought Rockwell back into the contest with a forty metre penalty after fourteen minutes, but four minutes before half time Pres’ out half Sean Og Murphy restored his side’s seven point advantage with a penalty.

An intercept by Daniel Horgan saw the number twelve score a second try for Pres’ on the hour mark and Sean Og Murphy converted for a 17-3 lead.

Three minutes from time Hanrahan got in for a try for the Tipperary College and he converted to leave seven points between the sides.

Substitute Killian Kingston scored a third try for the Mardyke College in the corner in injury time to see Pres’ draw level with C.B.C at the top of the honours list and also become the first side to inscribe their name on the new trophy which was presented by Munster Branch CEO Garrett Fitzgerald.