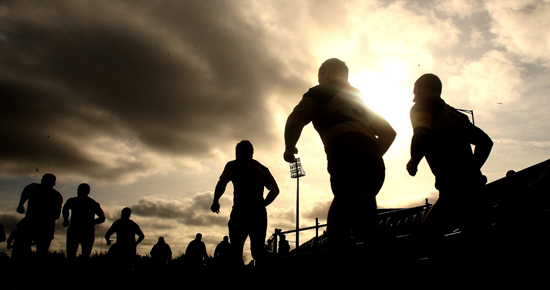 The Irish Rugby Football Union today announced a restructuring of the All Ireland League to be implemented for the start of the 2011/12 season.

The announcement follows a consultation process that begun in October 2009 with relevant stakeholders including provincial branches, clubs, the All Ireland Senior Rugby Clubs Association as well as coaches, players and referees and volunteers through the ‘Your Game, Your Say’ online survey.

The majority of opinion across this consultation process was the desire to retain an all Ireland competition format rather then moving to a provincial or regionalised competition grouping.

The new structure to be implemented from the 2011/12 Season will look to:

• Increase the Number of Senior Clubs from 48 to 52

The new All Ireland structure will include:
• A Division One consisting of two sections of 10 teams each playing home and away (known as 1A and 1B). Promotion and relegation between 1A and 1B would be one automatic and one decided by play-off.

• A Division Two consisting of two sections (to be referred to as 2A and 2B) of 16 teams each playing 15 games. Promotion and relegation between 2A and 2B would be two automatic and one by play-off.

• Promotion and relegation between Division 1B and 2A would be automatic two up and two down.

• The present qualifying league structure (provincial junior league winner’s round robin competition) would be maintained, including the promotion and relegation system to 2B.

• The team which finishes top of their respective division will be deemed to be the divisional league champions, and the winners of Division 1A will be deemed the All Ireland League Champions. (Consideration may be given to playoffs in Division 1A to be included in the future).

As part of this new structure, a desire to grow competitiveness in the league and to demonstrate the burgeoning strength in Irish domestic rugby since the inception of the All Ireland League, the number of senior clubs has been increased by four from 48 to 52. This will mean that each of the provincial champions from next season will automatically gain senior club status.

An emphasis for the new structure will also be a move towards playing more Friday night games to ensure that in as much as is possible, the AIL season does not come into direct competition with the provincial games by utilising the flexibility of clubs with floodlighting facilities.

The qualifications process for the new league structure at the end of the 2011/12 season will include promotion and relegation in the following order.

The issue of fully contracted players participating in the league has also been addressed to create a more level playing field for clubs participating and to ensure that the league continues to develop young players in a competitive environment.

The new regulations will see:
-Contracted players only playing in Division 1, with a reduction from three to two in the number of fully contracted players who may be included in the match day squads per team per match, of which only one can be a forward
-Fully contracted foreign players cannot play in the league as the role of the league is to develop indigenous players, not to develop overseas players
-Contracted development and academy players will have the ability to play in all divisions of the league without any restrictions

Commenting on the new structures, Domestic Game Chairman Stephen Hilditch said, "This new format comes at the end of a very lengthy consultation with all of our stakeholders in the game. Since the inception of the league, the competition has grown and created many cross provincial club relationships, something that the clubs themselves indicated they wanted to continue in our discussions with them. This desire to retain the all Ireland aspect of the league is reflected in the new structures."

"These structures are built upon the successful first year that we have seen in the new first division format in this season’s league, where the competition between clubs on a home and away basis has really lifted the standards. By expanding this by two teams in Division 1A and 1B, it increases those competition levels."

The introduction of rolling substitutions is a new aspect to the league which will allow players to come on and off during games and is aimed at improving player welfare and safety.

"This is designed to ensure that teams will no longer be under pressure to keep players on the field through fatigue or injury. Welfare of clubs players was upmost in the mind of the review group and this new measure is aimed at addressing this issue. With the structure set in place for five years, this stability is essential for the growth of the game in the Irish Rugby framework and to attracting potential new sponsors, of which we are currently in discussion with", said Scott Walker, IRFU Domestic Rugby Manager.

Chairman of the IRFU All Ireland League Review Group, Ian McIlrath said, "This process has been an illustration of the improved relationships between all of the concerned stakeholders in club rugby and a desire to get to a position where the needs of the competition were addressed. I would like to thank all of those who took part in the consultation and look forward to seeing the new structures being implemented."

IRFU President John Callaghan said, "The importance of the All Ireland League in the fabric of Irish Rugby cannot be underestimated and in these changing times, the new structures represent the need for progress of club rugby in Ireland. I congratulate all of those involved and look forward to the increased competition that these new structures promise to bring."