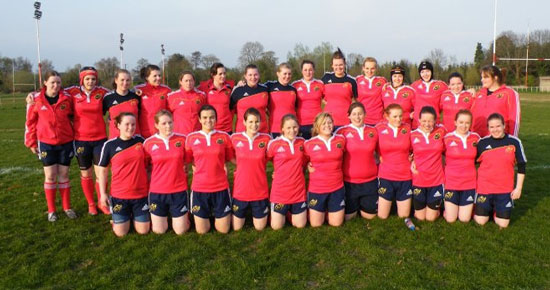 Munster U-19’s took on University Of Limerick recently at Annacotty in their last game of the season.

UL started the match very strongly keeping the Munster defence under pressure. They remained within their 22 for much of the opening exchanges despite losing their two centres early in the game through injury.

The pressure finally paid off for UL when they crossed the Munster line in the corner through winger Aimee Dwyer. This score seemed to spur the Munster team into action and they were rewarded with a try of their own from winger Danni Delahunty after a break up the right side of the field by full back Nicole Cronin.

Munster added a further score before half time through Aisling McCarthy which was converted by Nicole Cronin leaving the score 12 – 5 at the break.

UL continued to probe and test the Munster defence in the second half and at times forced cover tackles from the Munster girls to prevent them crossing the line. Half time substitute Freda Casey added to the Munster score ghosting into the line to take an offload from inside centre Ali Askins scoring under the posts with Cronin adding the conversion.

In the dying moments of the game Louise Fitzgerald crashed over the line to leave the final score at Munster U19’s 24 UL 5.

Munster Rugby would like to thank UL Bohemian RFC for the use of their facilities.