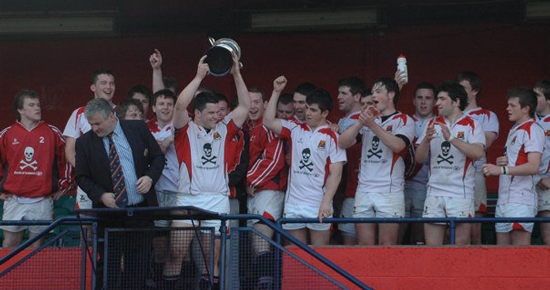 Club notes this week are from Clonakilty RFC as they wrap up their season on a high, Kinsale RFC as they look forward to the annual Kinsale 7s, and UCC who claim another U21 title.

The final week of the season was just that. Clonakilty gave season 2009-2010 a fitting send off by winning three cup finals in the final week. Pride of place must go to the under 15s who brought two cups to The Vale, winning the West Cork Cup against neighbours Bandon in Dunmanway last Thursday night. They followed this up with a thrilling win in Musgrave Park last Monday when they defeated old rivals Highfield to lift the South Munster League trophy. It was a riveting tie with both sides exhibiting huge hunger. Highfield looked extremely dangerous in the backs but it was Clon that kept the ball and the territory for the vast majority of the game. They had a chance of the lead midway through the first half but the penalty attempt was narrowly wide. Highfield made no mistake with a rare incursion into Clon territory when they goaled a penalty to lead 3-0 at the break.

The second half resumed with Clon in the ascendancy but they will have been worried by the malfunction ing line out. They missed another opportunity to draw level with a missed penalty attempt. They battered the Highfield line led by the formidable form and pace of Donal Lucey and Henry Jennings for a full twenty minutes but a resolute and well-organised defence denied them time and again. However the pressure was bound to tell and from a simple first phase move Clon deservedly scored a fine try from a scrum. The Highfield pack will be glad that at this age group the scrum can only be pushed a metre or they would have been destroyed by the Clon eight with a rock solid front row. It all came down to sustained pressure in the end and from that scrum the ball was moved quickly through several hands to Joe White, who had also been prominent in stopping attacks from Highfields backs and he crashed over and twisted crucially in the tackle to ground. The superb conversion by Brian Chan forced Highfield to seek a try in the final minutes and this they did with great energy and it was The West Cork side’s turn to defend desperately and this they did with tenacity to finish a great season for the group.

The Development Squad capped their fine season with a sensational 18 – 13 win over Cork Constitution in The Mick Barry J2 Cup Final in Musgrave Park last Friday night. It was a good game played in excellent conditions. Ciaran Calnan kicked five out of five penalties and had a fine all round game at out-half. Eoin Ryan at scrum half showed that he has all the necessary attributes to play at senior level. The drop goal by full back Kieran O’Donovan from close to the the halfway line was as exceptional as it was unexpected and ensured a five point lead going into the final ten minutes of the game. Matt Kirby’s shift to outside centre was a success and James O’Driscoll and Barry Houlihan threatened throughout. In the forwards John Somerfield stood out and John O’Regan, Paudie O’Connor and Terry Phair added steel. The defence in the final ten minutes when Con came calling was unflinching. A feature of the campaign was the consistent performances of the youngest members of the squad, Ethan Jennings, David Healy, John Collins, Jason Hunt and Paraic O’Leary. They will surely form the spine of an under nineteen team next season.

The squad was quick to recognise the input of the management team to the success and enjoyment of their season. They asked Loose Head to express their gratitude to mentors Ray O’Neill, Kevin Dillon, Noellie Bear O’Sullivan and coaches Conor Murphy, Paudie O’Connor and Derek Dillon and he is very happy to oblige. Best wishes from the squad and all at the club to The Bear for a speedy recovery.

On Thursday, the day this edition hit the streets, Noel O’Sullivan received The Celtic Ross/Southern Star West Cork Sports Star of the Month Award in The Celtic Ross. A large number of team mates and West Cork rugby supporters toasted Noel’s phenomenal try-scoring exploits over the nine years that Clon have played in the All Ireland league and that saw him claim the all-time AIL try-scoring record with 57 trys. At a mere 28 years of age Noellie could go on to create an unsurpassable mark and continue to entertain The Vale Faithful. A congratulatory email from the legendary Munster winger Johnny Lacey, who had an impressive 55 trys before he turned to refereeing, was read. Johnny’s threat to make a come back failed to dampen spirits and a good night was had by all!

The numbers drawn in the club lotto last Saturday were 2, 8, 15 and 29 and there was no winner. The Lucky Dip winners were Jo Keane, Kieran White, John Condon, Malachy Boohig and Moya Knowles. This Saturday, in Scannells Bar at 9.00pm, the Jackpot played for will be a very welcome Five Thousand Euro

The 2010 Heineken Kinsale Seven’s takes place on the May Bank Holiday (1st-3rd May) and was launched on Monday 19th April by Irish international legend and current Director of Rugby at Ulster – David Humphreys and Irish International and Ulster legends Andy Ward and Jonathon Bell.

For 22 years now rugby festival fever has been the toast of Kinsale and this year the Heineken Kinsale Sevens, hosted by Kinsale Rugby Club, is set to be one of the most memorable in its history. The 2010 line out is expected to feature teams from as far and wide as Africa and Fiji as well as a host of teams from across Europe.

The Heineken Kinsale 7’s generates in excess of €;5 m for the local economy. It is a hugely important event for Kinsale town and district and allows the destination showcase its heritage and gourmet reputation. . Visitors can find out more details on the big event at www.kinsalesevens.com

Two tries each from fullback Gavin Nugent and hooker Kevin O’Byrne, plus one each from Conail Murphy, Kevin Kidney and Graham Mackessy, plus four conversions and two penalty kicks from Kidney brought the cup back to UCC.

This is the third trophy the UCC U21s have won this season when adding the Waterpark Ellickson/Kavanagh trophy back in October and the coveted Fraser Mc Mullen All Ireland U21 Champions Title (for a fifth time – 1997, 2002, 2004, 2007, 2010). A chance to add yet another title slipped by when UCC lost the final of the U21 Intervarsity Conroy Cup to UCD back in October in Cork by a score of 11-15.