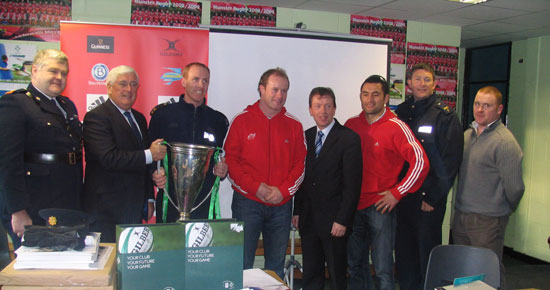 Munster Rugby were delighted to support the Emergency Voluntary Services Information and Recruitment Exhibition which took place on Friday 6th February and Saturday 7th February 2009, at the Terrence MacSwiney Community College in Knocknaheeny.

The aim of the exhibition was to encourage young people to participate in the Emergency Voluntary Services, to enhance their future career prospects and to promote civic pride and civic development.

As part of the official launch an Air Corps Helicopter flew Munster Rugby Players Frankie Sheahan and Rua Tipoki to the College where they presented the Heineken Cup to all in attendance. Also present were Minister for Education Batt O’Keeffe and Superintendant of An Garda Siochana Con Cadogan.

Munster Rugby Development Staff and members of local Rugby Clubs hosted a stand during the course of the event and provided first hand information on the many benefits of rugby as a sporting and leisure activity.

Provincial Domestic Game Manager Ultan O’Callaghan welcomed the opportunity to be involved in this worthwhile initiative and the promotion of Domestic Rugby stating "This is a great chance to encourage the participation of young people in sporting and voluntary organisations in the local community and Munster Rugby look forward to the ongoing development of rugby within the Cork City North region".