Munster Referees on the International Stage 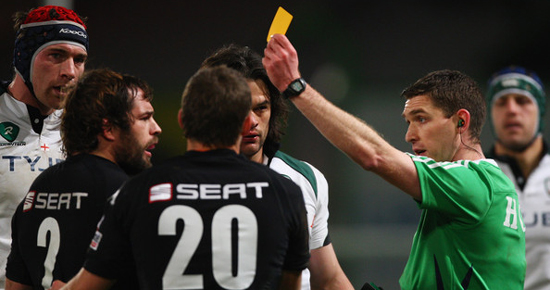 Munster Referees continue their international success with the announcement of several appointments for key games during the Summer and also the addition of some new faces to the IRB Panels.

George Clancy will referee the Pacific Nations Cup game between Fiji and Japan in Fiji on June 12th and also the clash between New Zealand and Wales a week later in Dunedin.

The Bruff man has enjoyed a successful refereeing season with 6 Nations honours for the Wales v Scotland game, Autumn Internationals and taking charge at this Saturday’s Heineken Cup Quarter Final between Biarritz and Ospreys.

Fitzgibbon refereed his first international when he took charge of Wales v Samoa in Autumn 2009, and will referee the Toulon v Scarlets game in the Amlin Challenge Cup this Saturday.

Munster Coaching Development Officer John Lacey has taken another step up on his international refereeing career after being added to the IRB Assistant Referee Panel. This season he has refereed in the Amlin Challenge Cup and the Magners League.

All three Referees are former winners of the Munster Rugby Referee of the Year Award.

Owen Doyle, Director of Referee Development, welcomed the appointment of so many Irish officials, "We are delighted to see Irish officials being recognised at the pinnacle of the game. It is testament to the ground work we do through our Referee Development Officers in all four provinces, and to our elite pathway. It is particularly pleasing to see a former Provincial player, John Lacey, making another step up in his post playing career."

If you are interested in refereeing, the next Munster Association of Referees course is taking place in Mallow GAA Club, Cork, on September 11th.